When U.S. soybean farmers chat about international trade at the local coffee shop, it’s not unusual for China to dominate the conversation. After all, the world’s most populous nation is also the world’s largest soybean importer.

“Looking back, it’s hard to believe, but when we started working in China in 1982, the Chinese were actually a small exporter of soybeans,” recalls Jim Sutter, CEO of the U.S. Soybean Export Council. “They didn’t import their first U.S. soybeans until 1995, but since then, they’ve grown into the largest market for soy from all origins in the world. The Chinese import 60% of all soybeans that enter international commerce.”

But the seemingly unsatiable Chinese appetite for U.S. soy abruptly disappeared in 2018. Citing unfair trade practices and intellectual property theft as justification, the United States levied new tariffs and trade barriers against Chinese goods. In response, the Chinese government imposed retaliatory tariffs on U.S. goods, including a 25% tariff on soybeans. A trade war had begun.

“Things were pretty dire for U.S. soy in 2018,” says Virginia Houston, director of government affairs for the American Soybean Association. “The trade war coincided with an outbreak of African Swine Fever in China, so soybean demand there plummeted. Prices were low, and we weren’t selling to our biggest customer.”

The war escalated until January 2020 when the Phase One Trade Deal was signed by both countries. For U.S. soybean farmers, the agreement meant their product was excluded from retaliatory tariffs, and Chinese importers began ordering soybeans again. While some farmers considered it the end of the trade war, Phase One was more of a cease-fire—and it expired at the end of 2021.

“While we are selling our soybeans now, there’s still uncertainty on the horizon because the tariffs are still in place on both sides,” Houston says. “Without codification on how we move forward, the Chinese could take away the tariff exclusion on soybeans, and we could be back to where we were in 2018. So, there are lingering questions.”

In May, ASA was among more than 40 industry and association groups that sent a letter to U.S. Trade Representative Katherine Tai calling for tariff relief in the face of the pandemic, supply chain disruptions, inflation and the impacts of the war in Ukraine.

“Our message is that the tariffs are hurting U.S. agriculture,” Houston says. “If the U.S. lifts its tariffs on Chinese goods, our hope is that the Chinese will eliminate its retaliatory tariffs.” 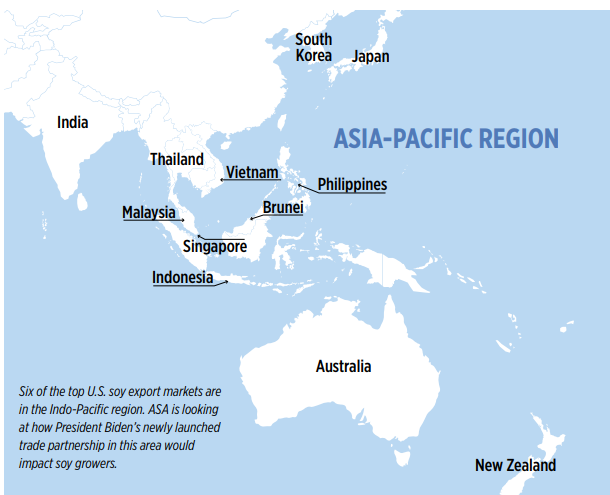 Since the mid-2000s, the United States has worked to build relationships with trading partners in the Asia-Pacific region, a key geography for soybean exports. In 2008, talks among 12 nations—including Australia, Brunei, Canada, Chile, Japan, Malaysia, Mexico, New Zealand, Peru, Singapore, Vietnam and the United States—began on the Trans-Pacific Partnership (TPP), an agreement containing measures intended to lower both tariff and non-tariff trade barriers and highly supported by ASA. All 12 nations signed on for TPP in February 2016, but less than 12 months later, newly elected President Trump withdrew the United States from TPP, preventing it from moving forward.

Undeterred, the remaining 11 nations agreed to revive the plan. Now calling it the Comprehensive and Progressive Agreement for Trans-Pacific Partnership (CPTPP), the group finalized the agreement in January 2018, and by the end of 2018, CPTPP was ratified and came into force—without the United States.

“There have been lost opportunities by not following through on TPP,” says Sharon Bomer Lauritsen, agricultural trade policy consultant and former Assistant U.S. Trade Representative. “It provided for lower tariffs on food and agricultural products. Increased exports of U.S. meat and poultry would have increased demand for soybeans as animal feed, so U.S. soy would have benefited. TPP also would have established a higher set of rules for sanitary and phytosanitary measures that impact U.S. exports.”

“Looking beyond China, this area is extremely important for U.S. soy, Houston says. “Six of our top 10 export markets are in the region, and it’s only expected to grow as consumer demand in those countries continues to rise.”

In May, the Biden administration announced the launch of a new trade partnership with 12 other nations representing 40% of the world’s gross domestic product—the Indo-Pacific Economic Framework for Prosperity (IPEF). The plan focuses on four key pillars to establish commitments that will lead to increased economic engagement among the partners. These include fair and resilient trade; supply chain resiliency; clean energy, decarbonization and infrastructure; and taxation and anti-corruption. Houston says nations may elect to participate in one or more of these pillars.

“We’re looking at how IPEF could benefit U.S. soy, and right now, that is not 100% clear,” Houston says. “We do know that it will not include any actions to reduce tariffs and improve market access for U.S. agriculture, which is the action we’ve been asking for.”

Bomer Lauritsen agrees. “Whereas TPP was clearly an actual economic and trade agreement, IPEF does not appear to be that, at least at this stage, particularly for the food and agriculture sector,” she says.

While IPEF won’t likely change tariffs, two non-tariff trade barriers that could be addressed are agricultural biotechnology approvals and maximum residue limits. Both areas are of interest to U.S. soy exports.

“A lot of countries still don’t have science-based regulations for products derived from agricultural biotechnology,” Bomer Lauritsen says. “A renewed effort to have functioning regulatory systems to approve new varieties of soybeans in these countries is an important agenda item. Likewise, creating systems in these countries to establish maximum residue levels for crop protection products that are science based should also be a focus.”

A future without trade agreements?

For nearly 40 years, free trade agreements have been used successfully to expand markets for U.S. products around the world. The United States entered its first FTA with Israel in 1985, and today, bilateral and multilateral FTAs are in force with 20 nations.

“These agreements are all very much alive and have provided important economic benefits to American farmers and to the U.S. economy as a whole,” Bomer Lauritsen says. “If you look at new FTAs that other countries are entering into, I think they are still a critically important tool that the current administration should be looking at to help the U.S. economy.”

Of the 20 nations with which the United States has FTAs in force, only three are currently major importers of U.S. soy: Mexico, Canada and Colombia. Sutter says that in all three cases, the trade agreements have yielded benefits for soybean growers.

“Prior to the agreement with Colombia in 2012, for example, South American-origin products had advantages there over U.S. products,” he says. “The FTA helped level the playing field, and we’ve been able to take advantage of that. Shipments of U.S. soybeans and soybean meal to Colombia have almost tripled since the FTA was signed. Now, they are the third largest market for U.S. soybean meal. 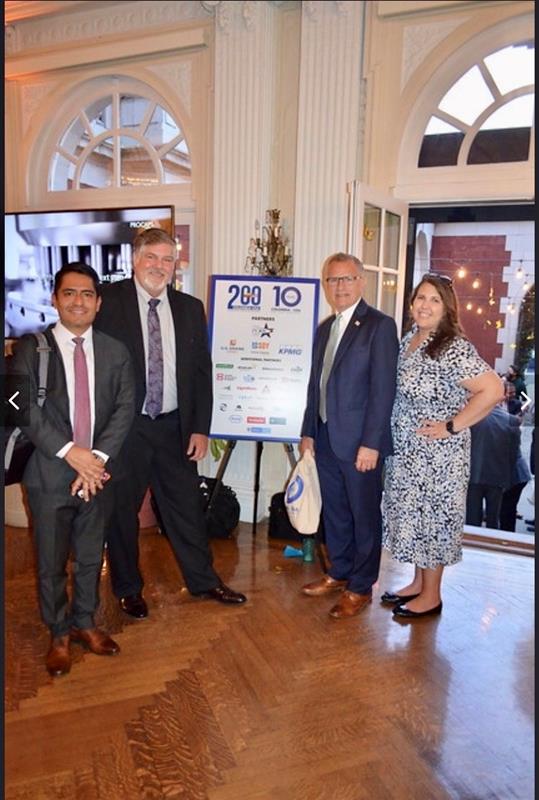 “The FTA has really generated goodwill and positive trade between the two countries,” he continues. “If we could do more of those, it wouldn’t be a bad thing.”

Sutter notes that in 2021, the United States lost a tool for creating agreements when Trade Promotion Authority, a fast-track negotiating ability delegated to the U.S. president by Congress, was allowed to expire.

“It’s difficult to get any country to want to negotiate seriously or even contemplate a free trade agreement without TPA in place,” he says. “Getting an agreement ratified by Congress without it would be too complicated.”

While new FTAs may not be on the horizon, Sutter believes international markets can continue to expand by differentiating U.S. soy using both intrinsic and extrinsic qualities.

“We can differentiate our soybeans by the internal characteristics, whether that’s the amino acid content, the oil composition or some other value,” he says. “U.S. soy also has a demonstrable advantage in the area of sustainability.”

Bomer Lauritsen credits USSEC and its efforts in 2019 that prompted the European Union (EU) to recognize U.S. soybeans as sustainable under the EU’s Renewable Energy Directive.

“The U.S. soybean industry has really been a global leader on the whole issue of sustainability,” Bomer Lauritsen says. “We really need to start thinking about and defining the trade rules around the issue so that countries don’t create unnecessary barriers to trade in the name of sustainability.”

Thanks to continued investment by the industry, new opportunities for U.S. soy abound around the globe. Export volumes confirm the successes. During the 2020/2021 marketing year, U.S. soy achieved a record aggregate export volume of 74.76 million metric tons valued at more than $34 billion.

“We set a new record in the midst of a global pandemic, and we did it without setting a new record in China,” Sutter says. “That’s a really good thing. It shows that we’re growing in new markets. We’re creating win-win relationships. When our trading partners do well, then U.S. soybean farmers do well, too.”