A natural question to ask is, “Why would a country trade if it can produce a product at home? After all, doesn’t the domestic industry provide jobs and income?” Absolutely, it provides both. However, the gains from trade more than offset losses, providing increased economic growth for all trading countries.

A country’s production is limited by its resources, including natural, capital and labor. Without trade, it can’t consume more than it can produce of any good. Even if a country could produce every product it wanted to consume, the resources would still limit the volume. With trade, consumption within countries exceeds the levels that would exist without it.

If a country engages in trade, it tends to specialize in certain products. What are the optimal products to specialize in? Surprisingly, it isn’t necessarily those that the country is the best at producing relative to other countries. Instead, the most is gained when countries focus on producing goods it is best at relative to other goods it could produce. A country could be the most productive in producing all goods and still gain from the international marketplace. This concept even goes down to the individual level and explains why society is better off with people choosing occupations as opposed to attempting to be self-sufficient. In this case, it is still trade—albeit at the individual as opposed to country level.

When fair trade occurs, the benefits and costs are rarely experienced equally. Whether producers and consumers of a particular good gain or lose depends upon whether exports or imports are created through trade. However, the overall benefits are greater than the losses, thus creating a positive impact for the country. 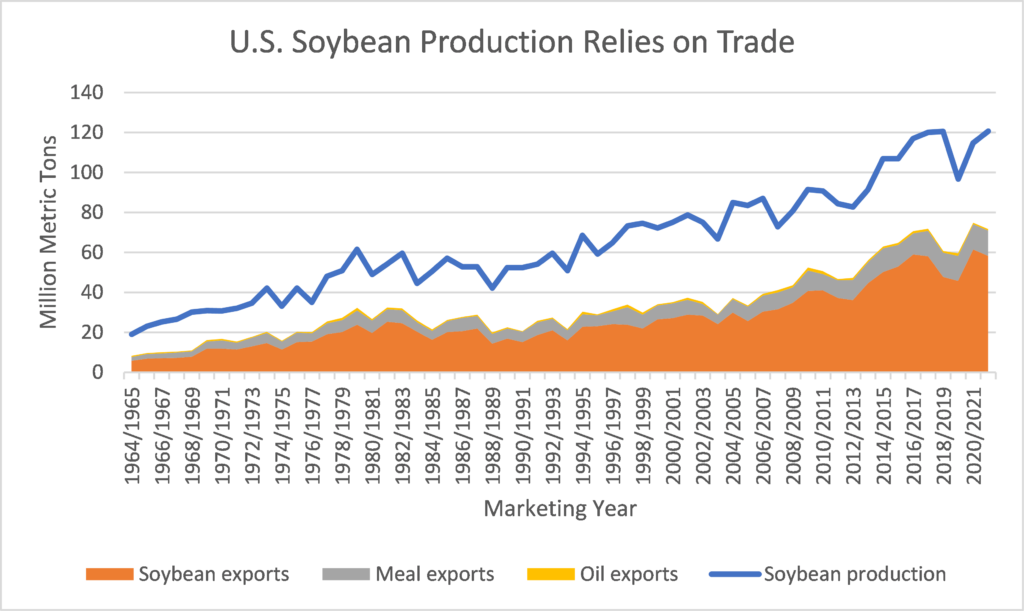 Soybeans are the number one U.S. agricultural export by value, but the gains from trade extend throughout the sector as the U.S. exports many agricultural products and imports many inputs. Continuing to expand trade helps increase the price farmers receive but also provides a net positive benefit for society as a whole.