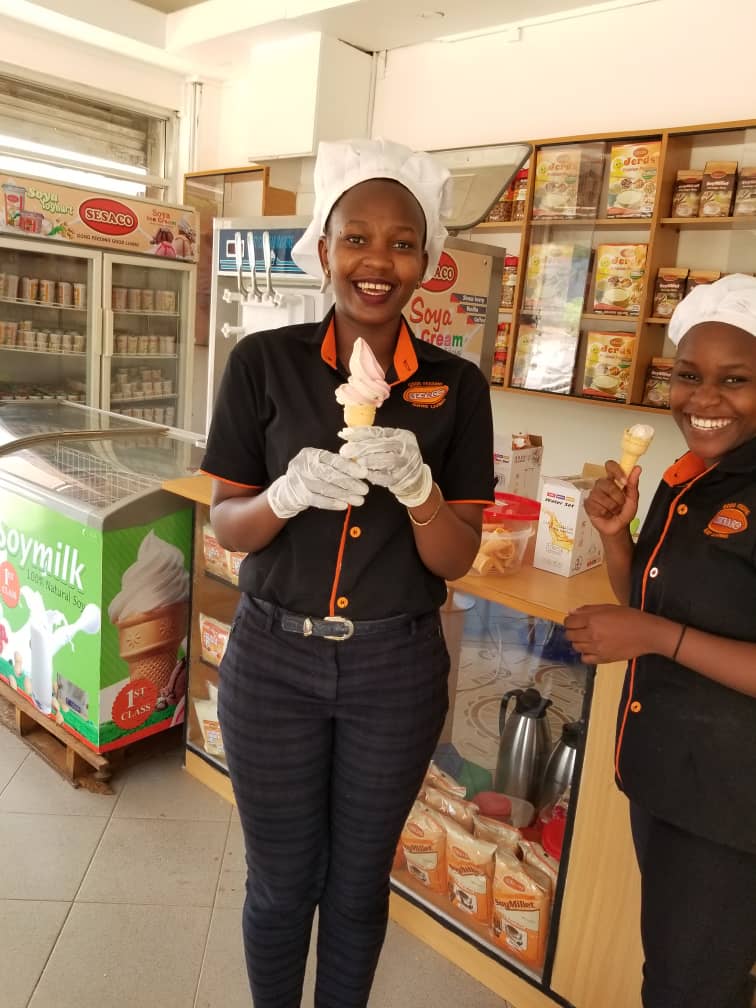 SESACO exemplifies the enthusiasm for U.S. soy and its nutritional power for breads, beverages, school meals and more. In April, SESACO introduced frozen soy dessert, a first for Uganda and quite possibly the entire East African region.

Demand for food and feed containing U.S. soy is growing in developing countries, and the American Soybean Association’s (ASA) World Initiative for Soy in Human Health (WISHH), along with its strategic partners, is driving that growth in African, Asian and Central American markets.

“The collaboration is promoting trade between us,” said founder Charles Nsubuga. “The neighboring countries are picking up the idea because of what exists between us and ASA/WISHH. The economic impact is such a big one that could not have taken place without this kind of partnership.”

Demand for high-quality soy protein products like defatted soy flour and TSP opened the door for trade. “We can’t produce these products at home, so we better import them from the USA so we can address two main challenges: One is nutrition and the other is economic,” Nsubuga said.

In April, SESACO introduced frozen soy dessert, expanding its line of soy-containing beverages, porridges, yogurt and more. The company also supplies Ugandan bakers with U.S. soy flour and training on how to boost their profits—and at the same time increase the nutrition and shelf life of their breads.

ASA/WISHH also introduces new feed customers like Catherine Osei-Tutu to U.S. soy and its suppliers. The West African poultry farmer purchased her first 4,640 bushels (100 metric tons) of U.S. soybean meal this year for her 7,000-bird farm in Ghana. WISHH leverages farmer dollars with outside resources such as the U.S. Department of Agriculture (USDA) Foreign Agriculture Service (FAS), which supported Osei-Tutu to join WISHH at the International Production and Processing Expo (IPPE) in Georgia, where she met with U.S. soy suppliers.

Also in Ghana, WISHH’s work with Yedent Agro Group, a manufacturer of human foods made with soy, assisted the company’s expansion into livestock feeds production. The company purchased an extruder from Insta-Pro International in Iowa. Yedent will buy U.S. soy flour to manufacture TSP for use in the Ghana school feeding program, driving demand for 2,500 metric tons of TSP per year.

WISHH is the vehicle for U.S. soybean farmers to continue to drive customers to innovate and invest in food and feed processing by providing technical services in fast-growing developing countries. WISHH identifies and brings online new export destinations, establishes the U.S. brand and market share, and creates long term demand for U.S. soy.