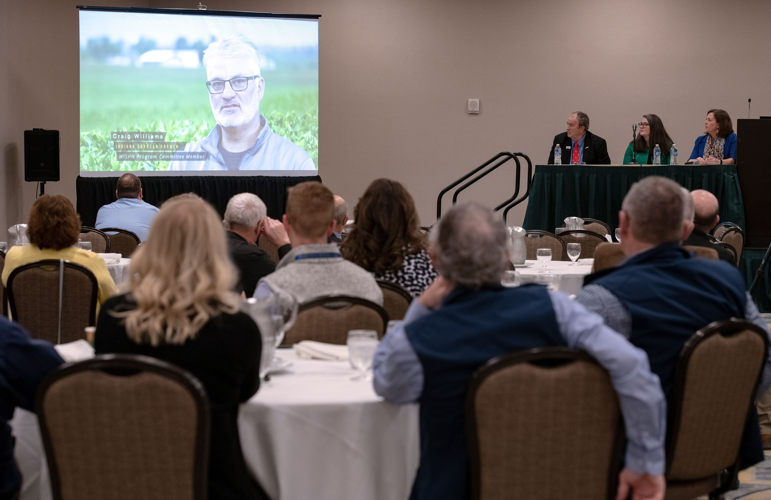 ASA’s World Initiative for Soy in Human Health (WISHH) Commodity Classic panel showcased U.S. soy’s export opportunities in global food security and also tapped into the timely topic of how U.S. soy contributes to America’s diplomacy with other countries. The expert speakers from across the value chain stressed the important role U.S. farmers have in growing crops that meet the high-quality requirements for these foods to remain safe for people to eat months after they are shipped from the United States.

“I was so pleased to see 80 soybean growers attend our important WISHH panel to hear how U.S. soybean growers can be leaders in global food security,” said Hayden. “WISHH and USB are working together to bring the power of U.S. soy protein to improving food security around the world.”

The panel builds on the December 2021 USB-funded dialogue on global food security that WISHH organized in conjunction with a tour of Edesia Nutrition in Rhode Island. Participants included soybean growers from seven states as well as representatives from USDA and U.S. Agency for International Development, and university faculty and soy processing representatives.

Edesia Nutrition Executive Director Maria Kasparian joined WISHH’s Commodity Classic panel to follow up on opportunities that the group identified in December. The enterprise uses only U.S. soy flour to manufacture its high-protein food packets that are distributed in more than 60 countries. Edesia forecasts it will use 7.5 million pounds of soy flour this year, requiring the equivalent of 170,000 bushels of soybeans.

Thomas, Middleton and Kasparian all described how food security is tied to national security and that programs, such as Public Law 480, purchase U.S. soy-containing food products in an act of U.S. diplomacy. The U.S. government has mandated the use of U.S. commodities in the historic P.L. 480 program since its creation after World War II.

Hayden and Perry shared how WISHH connects trade and development, which improves food security in the regions where WISHH works. USB is also supporting WISHH’s exploration of partnerships, including for global food security, that contribute to the USB vision of partners to deliver sustainable soy solutions to every life, every day.