The last Economist’s Angle focused on the rise of renewable diesel. The growth is being driven by demand for the properties of the fuel in existing biofuel markets and not by the implementation of new policy. While plans for over 7.0 billion gallons of renewable diesel production have been announced, only a portion of that will likely be actualized. Given the excitement surrounding renewable diesel and the occurrence of higher soybean oil prices, it is important to examine what is and isn’t happening in the vegetable oil markets.

When discussing the rise of renewable diesel, it is important to note that the federal blending requirements for biodiesel and renewable diesel in 2021 are unchanged from 2020 levels at this time. In other words, the growth of renewable diesel and subsequent market reactions is supported by, but is not being driven by, blending obligations. Instead, market preferences within the current programs are the impetus for the dynamics. 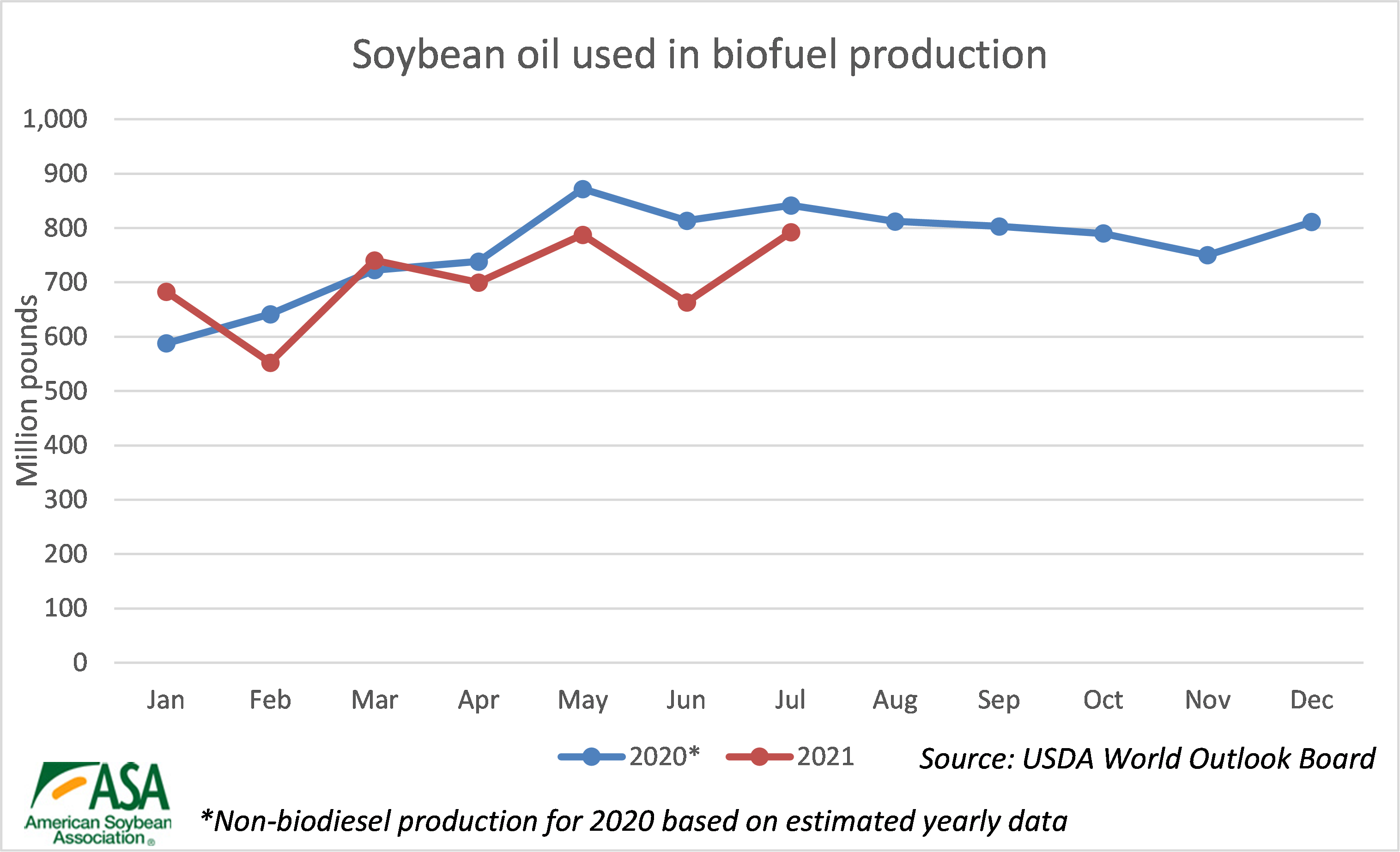 Despite the slate of renewable diesel facility announcements, overall use of soybean oil for biofuels has not increased in 2021 compared to 2020. The Energy Information Administration (EIA) did not track renewable diesel use in 2021, so USDA allocated the estimated renewable use for the year across all of the months and added it to biodiesel use that was tracked. Using these methods, USDA has 2020 use through July of soybean oil for biofuels of 5.2 billion pounds but only 4.9 billion pounds in 2021 over that time. In other words, the pace of soybean oil being used for biofuels this calendar year has not increased at this point.

However, soybean oil prices have been increasing for a variety of reasons, including global production challenges for other vegetable oils. This is spurring changes in the industry. First, domestic soybean crushing capacity is expanding, with at least 10 announcements for plant expansions or new facilities that will increase capacity by about 13%. Second, some of the crushing plants are adding the ability to produce refined, bleached and deodorized (RBD) soybean oil, and multiple renewable diesel plants are putting in feedstock pretreatment to eliminate their need for RBD oil[1]. This will increase the availability of this refined oil. Third, higher oil costs are slowing development of renewable diesel facilities[2]. Plants without pretreatment are vulnerable to RBD oil costs and deciding to wait for better economic conditions. Fourth, traditional biodiesel plants are closing as they face tighter margins. Biodiesel plants in Texas, Quebec and Kentucky have or are closing in 2021 for this reason, reducing biofuel demand for soybean oil.

These developments are to be expected as new demand for a product emerges. Prices rise initially, which limits growth, reduces other use demand (biodiesel) and spurs increased production. While soybean oil is a substantial share of the cost for renewable fuels, the same is not true for food. As a result, the latter is much less vulnerable to the price since it is generally a small share of the overall cost. In fact, USDA in the October WASDE does not project a precipitous drop in the food use category for soybean oil. The 2021/22 projected consumption remains below 2020/21 levels but above 2019/20 levels. This means that the U.S. is expected to be able to consume more soybean oil for food this marketing year than just two years ago, even with growing renewable diesel demand.

While the discussion thus far has focused on soybean oil and renewable diesel, it is important to note that prices for many inputs in general—and ag inputs, in particular—are up (Table 2). Prices for soybeans and corn are up by 10% and 31%, respectively. At the same time, some important input costs have gone up by much more. Fertilizer prices have risen dramatically. For example, monoammonium phosphate (MAP), which is very important for soybeans, is up by over 70%. The glyphosate price, which is also very important for soybeans, is up by 130%. These factors are squeezing farmer margins. Transportation costs to bring inputs to farms or haul farm goods have also risen dramatically, with Mississippi barge rates and ocean-going vessel rates both up by over 100%. This not only negatively affects agriculture, but much of the broader economy as well.

In conclusion, the U.S. soybean oil sector is expected to see an increase in demand with renewable diesel. Importantly, the increase in the quantity demanded by biofuels for soybean oil has not occurred at this point. Short crops of other oilseeds and vegetable oils have helped place pressure on vegetable oil prices. Even so, the oilseed sector is expanding to meet the oncoming needs. While biomass-based diesel blending obligations under federal policy have not changed from 2020 levels, any effort to roll them back would undercut the expansion. This would also immediately lower soybean prices at a time when farmers are facing significant increases in costs, are compressing margins. Instead, allowing the market expansion to occur will provide for increased soybean oil for domestic users into the future.