The value of agricultural exports when adjusted for inflation has approximately doubled in the past 30 years. While there are many reasons for this increase, research has shown that part of it can be attributed to programs that help market U.S. agricultural goods to foreign buyers. The Market Access Program (MAP) and Foreign Market Development (FMD) Program are two that have been important in expanding U.S. exports.

MAP and FMD are not export subsidies for U.S. agricultural goods. Instead, they match government dollars with dollars from the sector to promote trade and provide technical assistance abroad. MAP partners USDA’s Foreign Agricultural Service (FAS) with “U.S. agricultural trade associations, cooperatives, state regional trade groups and small businesses” to provide financial assistance for “consumer advertising, public relations, point-of-sale demonstrations, participation in trade fairs and exhibits, market research and technical assistance [1].” For non-branded promotion, the partners, who are trade associations, regional groups and state agencies [2], must contribute a 10% match. If the promotion is for branded products, the partners, consisting of cooperatives or small businesses, must then contribute a 100% match. Large U.S. businesses are not allowed to participate in the program.

The FMD program is a bit narrower in scope. FAS works with commodity and trade associations, known as cooperators, to promote U.S. commodities. Branded products, even if from small businesses, are ineligible for the FMD program. The program’s “projects generally address long-term opportunities to reduce foreign import constraints or expand export growth opportunities [3].” This can be done through infrastructure development, development of standards or many other means. Like MAP, FMD also has match requirements for cooperators.

Both MAP and FMD are funded through the Commodity Credit Corporation, which has authority to borrow $30 billion per fiscal year and must be replenished by Congress. MAP funding has remained at $200 million annually since fiscal year (FY) 2006. The 2018 Farm Bill maintains that level through FY 2023. However, automatic government spending cuts called sequestration have reduced the actual spending. After this and administrative expenses, allocations to partners have ranged from $171.9 to $176.8 million since FY 2014 (Figure 1). Likewise, FMD has been funded at $34.5 billion since FY 1997 and is funded at that level through FY 2023, but principally sequestration has reduced cooperators’ allocations to levels of $24.6 to $27.5 million. 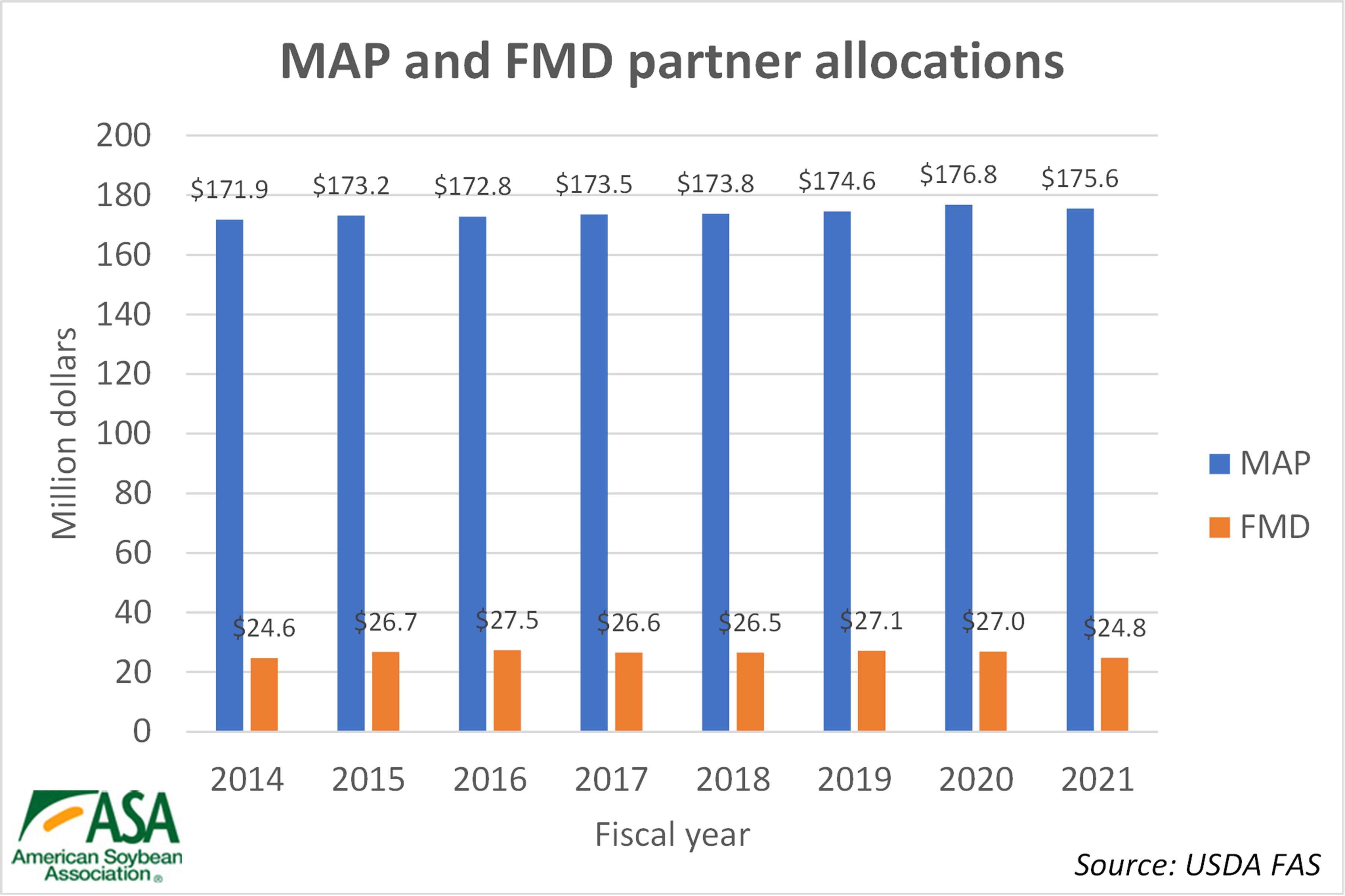 The MAP program was officially created in 1996 but can trace authorization back to 1978, while FMD was created in 1955. Available data about total export market development funding and partner contributions ends in 2014. However, MAP and FMD funding has not changed since FY’s 1996 and 1997, respectively, as already noted. Meanwhile, partner funding continually grew through the time period of available data to be about twice the level of federal dollars. 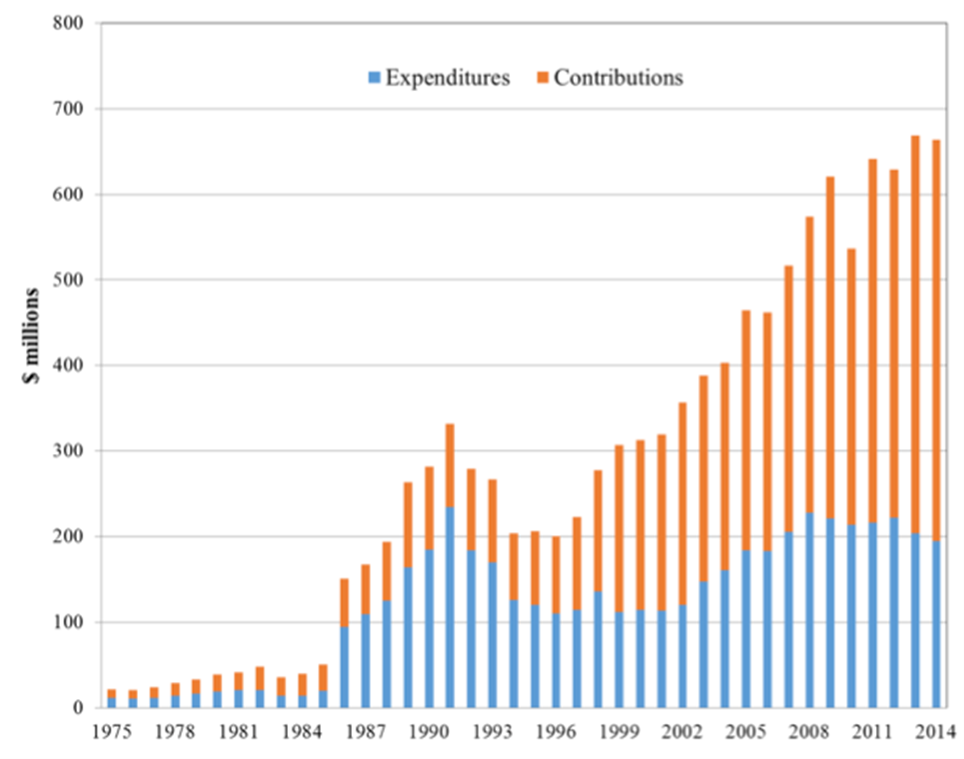 For FY 2021, 67 organizations received MAP funding and 21 received FMD funding. Figure 2 shows where the cooperator and partner offices are located. Note that, even though an office is located in a country, its reach might extend far beyond, as it might serve the region or world. Central and South America, Europe and the Pacific region tend to have cooperators or partners in many of countries. While these programs have a large footprint, spending on marketing is classified as “green box” at the World Trade Organization: This means the WTO categorizes these programs as non-trade distorting. 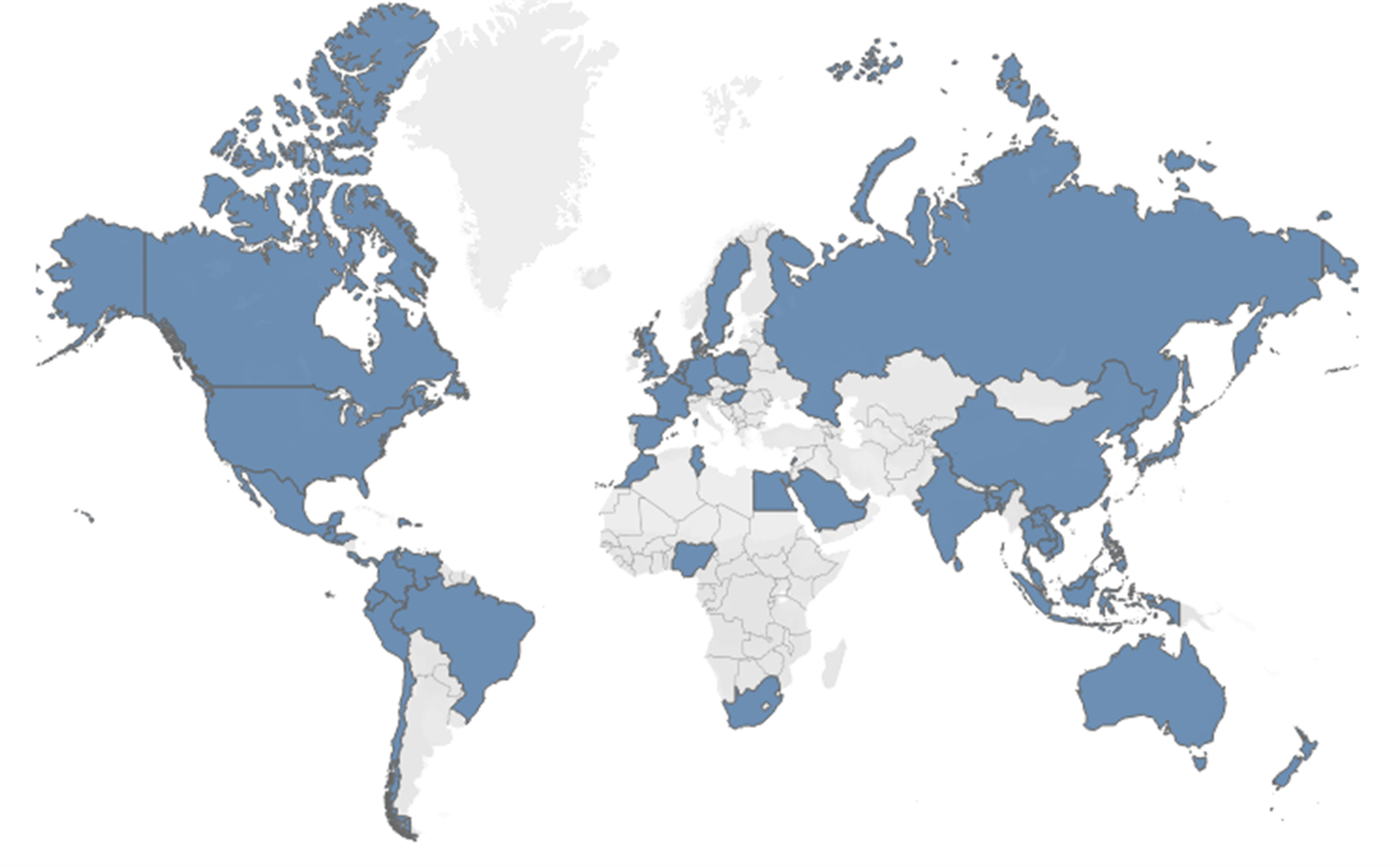 The export marketing programs help to correct a market failure as outlined in Reimer, Williams, Dudensing and Kaiser (2017) [4]. The United States enjoys tremendous agricultural production benefits, such as favorable climate, soil and infrastructure—which help create the conditions to serve as a major producer. Many agricultural products can have different attributes based upon where they are produced in the world. A producer that engages in the expense to educate foreign buyers about the differences cannot prevent others in the production region from also realizing the benefits of new foreign demand for their regional product. Thus, the one (or group) who incurred the cost to establish the market may be undercut in price and unable to recoup the investment. As a result, the market is likely to underinvest in establishing new trade by product differentiation resulting in less than optimal levels of investment. The USDA Economic Research Service estimates that every dollar in U.S. agricultural exports creates $1.80 in economic output and every $1 billion creates 8,097 jobs. The market failure to establish new value-added trade has broader economic effects.

Fortunately, the MAP and FMD programs have helped address the issue. The government partnerships have stepped in around the world to market U.S. products and manage technical and logistical issues. The literature on the impacts of this investment has been consistent about the benefits. Reimer et al. (2017) performed an extensive literature review of studies that looked at the programs. Twenty four out of 25 five showed a positive and statistically significant relationship between commodity export programs and foreign demand. From 1977 to 2014, the programs led to an additional $309.7 billion in exports. The export programs had a net benefit-to-cost ratio of 10.81, and $13.90 in additional exports is generated for every dollar the program spends.

Reimer, et al. (2017) also noted that MAP and FMD are “vastly underfunded” from an optimal point of view. This is because large gains from exports are realized from additional investment. While industry contributions have grown significantly, government funding has remained stagnant. To see how the American Soybean Association and the U.S. Soybean Export Council utilize MAP and FMD to grow soybean demand abroad, visit click here.