The soybean processing industry intends to significantly grow over the next few years. This change will open up more domestic opportunities for soybean consumption. Soybeans are almost never used whole but are instead “crushed” to produce soybean meal and soybean oil. Expanding crush capacity provides additional places for farmers to sell their beans while providing more soybean meal and oil for the domestic market. To date, there have been announcements for 23 plant expansions, which would add about 750 million bushels per year in crush capacity.

Many of the crush plant announcements are being driven by the growth in renewable diesel (for a background on this topic, see the previous Economist’s Angle). Demand for soybean oil to produce renewable diesel has started to grow and is projected to continue on that path. To produce extra soybean oil, crush capacity in the U.S. also must grow. In fact, some of the announced renewable diesel plants have been paired with crush plant announcements through a joint venture. Of the 23 crush plant announcements, 13 are for new plants and 10 are for expansion of current plants, at least two of which have been completed. However, announcements are not shovels in the ground. Expansion is based upon growing renewable diesel production, and as the biofuels industry grows, so will the crush plant buildout. State and federal policy, permits, financing and many other issues will determine what happens. This article presents the announcement numbers with current facilities, but caveat emptor, the reality may be different. Even so, some of the facilities are already undergoing construction or have been completed, which means the industry is already growing but total expansion is unknown.

The U.S. currently has around 60 crushing plants with a total practical capacity of about 2.2 million bushels per year, which is about the crush level for the 2021/22 marketing year. Nameplate capacity of a plant is often in bushels per day and exceeds practical capacity due to maintenance and other considerations. Figure 1 shows the location, size and status of the soybean crushing plants in the United States. Crushing plants have historically been concentrated in two locations. The first is in the traditional, major soybean-producing region from Ohio west to Missouri and up north to Minnesota. These comprise the bulk of the plants and provide a short distance between the field and processing. The other, smaller area was the Southeast Seaboard. While fewer soybeans are produced in this part of the country, the area contains a significant poultry population that consumes soybean meal.

In general, the newly announced crushing plants are more west and north than previous plants. Soybean production has been expanding in this direction. The Northern Plains were more export-dependent, as crush capacity and animal ag did not exist locally to utilize soybeans in those locations. 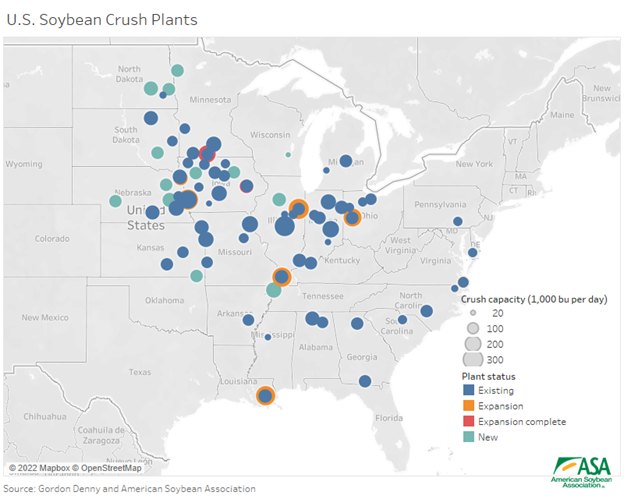 Iowa has the highest soybean crush capacity of any state (Figure 2) with over 1.3 million bushels per day of nameplate capacity (approximately 420 million bushels per year in practical capacity). Realized announcements would add about another 340 thousand bushels per day in nameplate capacity. Iowa is followed by Indiana and Illinois in total crush capacity. Indiana is currently looking at minimal increases in capacity while Illinois has 445 thousand bushels per day of nameplate announcements. Some of the states with the largest percent increases are North Dakota, Nebraska and Louisiana. Nebraska and Louisiana’s capacity would nearly double, while North Dakota capacity would increase about seven times if all of the announcements were realized. 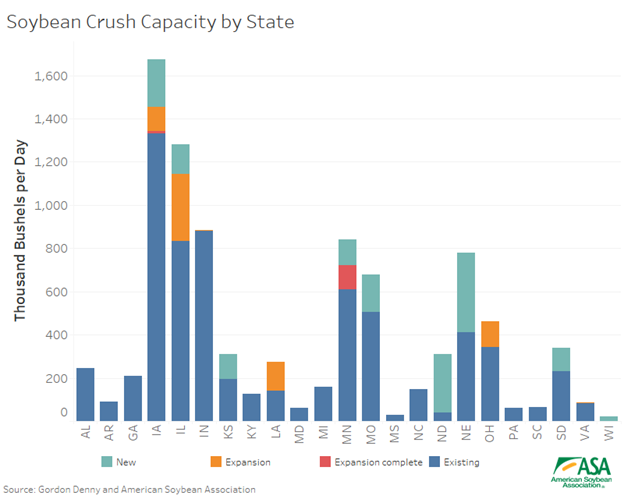 The increased crush capacity would change the interstate flow of soybeans. Figure 3 shows crush capacity relative to historical soybean production. States that exceed a ratio of 100% need to import soybeans to utilize their capacity, while states below that threshold would be need to export. States in the Southeast with large poultry flocks, such as Alabama, Georgia, South Carolina and Virginia, tend to be net importers of soy. Georgia has about 14 times as much capacity as production. Whole beans tend to be easier to transport than meal, which gives an advantage to crushing locally. With announced expansion, Louisiana would go from being a net importer of its soy production to a net exporter. Several large renewable diesel plants are planned for the New Orleans area, which would need the soybean oil. North Dakota would transition from utilizing less than 10% of its soybean production to about 50%, and Nebraska would transition from 42% to 80%. 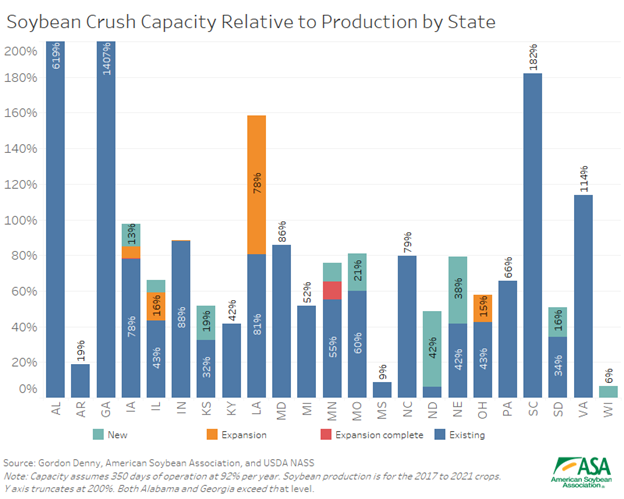 The anticipated timeline of the buildout of capacity would be over several years. Of the 2.33 million bushels per day of increased nameplate capacity, 120,000 has already been built. For the 2023 to 2025 calendar years, there are about 430 to 530 thousand bushels per day of capacity planned. This would bump up to 800,000 bushels per day in 2026. However, some of these longer timeframe announcements are more likely dependent on market and other factors for completion. 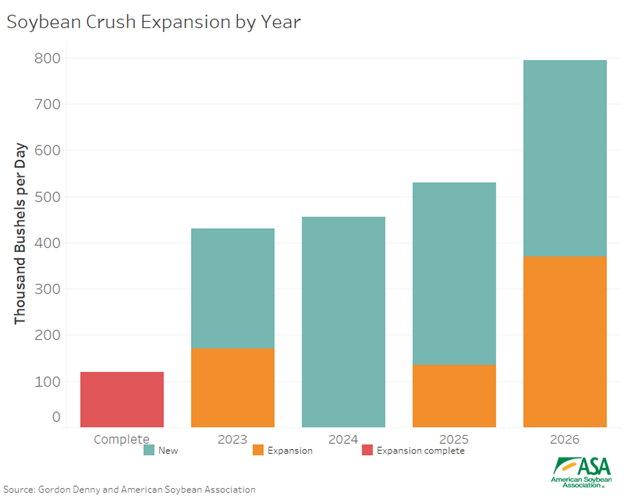 The soybean sector is expanding to meet upcoming growth in demand. The announced 23 new or expanded crush plants would increase crush capacity by 34%. However, as aforementioned, this is dependent on multiple factors to actually occur. Chief among them is the pace of renewable diesel growth. Strong margins for crushers have spurred billions of dollars in investment that will provide farmers with higher prices and more options for delivery. The increased output will allow the sector to continue to provide food while meeting increased demand for sustainable fuels.

[1] Nameplate capacity is the amount the plant could produce if operated without interruption. Maintenance and other issues often result in practical capacity being lower.