Economist’s Angle: The Outlook for Growth in Chinese Soybean Demand

Last month’s Economist’s Angle took a deep dive into the Phase One trade agreement with China. It concluded that China’s recent strong export pace would not be large enough to meet the 2020 goal. Even so, the soybean flows to China from the U.S. have been outstanding this fall, especially when considering that China purchased Brazilian beans at such a pace earlier in the year that Brazil has now imported a load of U.S. soybeans to meet domestic demand. The velocity of the imports by China raises questions about the future growth of soybean exports by China.

China’s rise as a major consumer of soybeans is well known, but a few statistics help drive home the magnitude of the transformation. The country consumed 9.7 million tons of soybeans in the 1990/1991 marketing year and USDA forecasts that number will grow to 117.4 million tons in 2020/2021. This would lead to an increase in the share of the world’s soybeans consumed by China from 9.3% to 31.8% over those corresponding years, supporting that China accounts for about 60% of the world’s soybean imports.

The following analysis is based upon USDA’s China estimates, including forecasts for the 2020/2021 marketing year. The opacity of China tends to lead to higher-than-average errors with data regarding the country.

The growth in China’s demand for soybeans has fundamentally been driven by increasing incomes in the country. The rise in wealth led to higher demand for meat protein. Figure 1 shows this growth since 1990. The average Chinese resident was consuming about 10 pounds of meat annually at that point. The number rose to a high of about 25 pounds per capita in the 2014/2015 marketing year. Note that these numbers are for beef, poultry and pork only. While all three of these meat types experienced growth, pork is the main meat consumed and achieved a 75% share in the 2014/2015 marketing year. 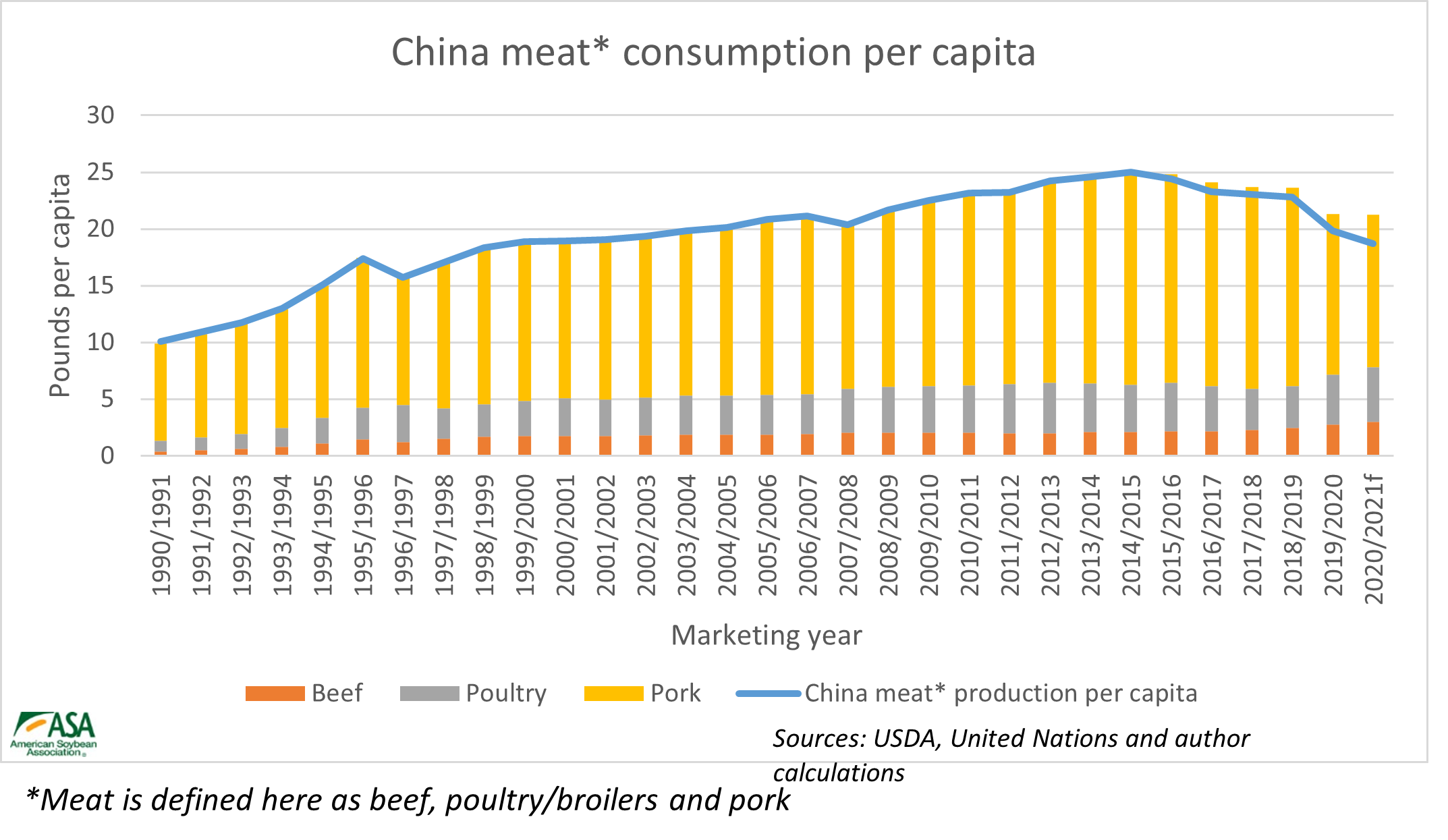 The historical increase in China’s meat consumption was met by domestic supply, which alone increased feed demand. However, another shift was simultaneously occurring as China moved away from backyard livestock to commercial operations. This change spurred the transition from swill feeding to commercial rations (Figure 2). In fact, the amount of commercial feed use per pound of meat has nearly doubled since the early 1990s. While China used only three to four pounds of commercial feeds per pound of meat production in the early 1990s, the amount has about doubled and is expected to be about seven pounds for the current marketing year. For comparison, the United States uses about eight pounds of feed per pound of meat.

China has largely completed the feed transition. Most of their rations are composed of corn or corn products. However, soybean meal is the next major component of the rations and has had a phenomenal increase in its share. Whereas corn input per pound of meat production increased by about 50% between 1990/1991 and 2020/2021, soybean meal increased by a factor of over 33%. This change led to the large increase in soybean imports as China attempted to remain self-sufficient with corn but not beans. 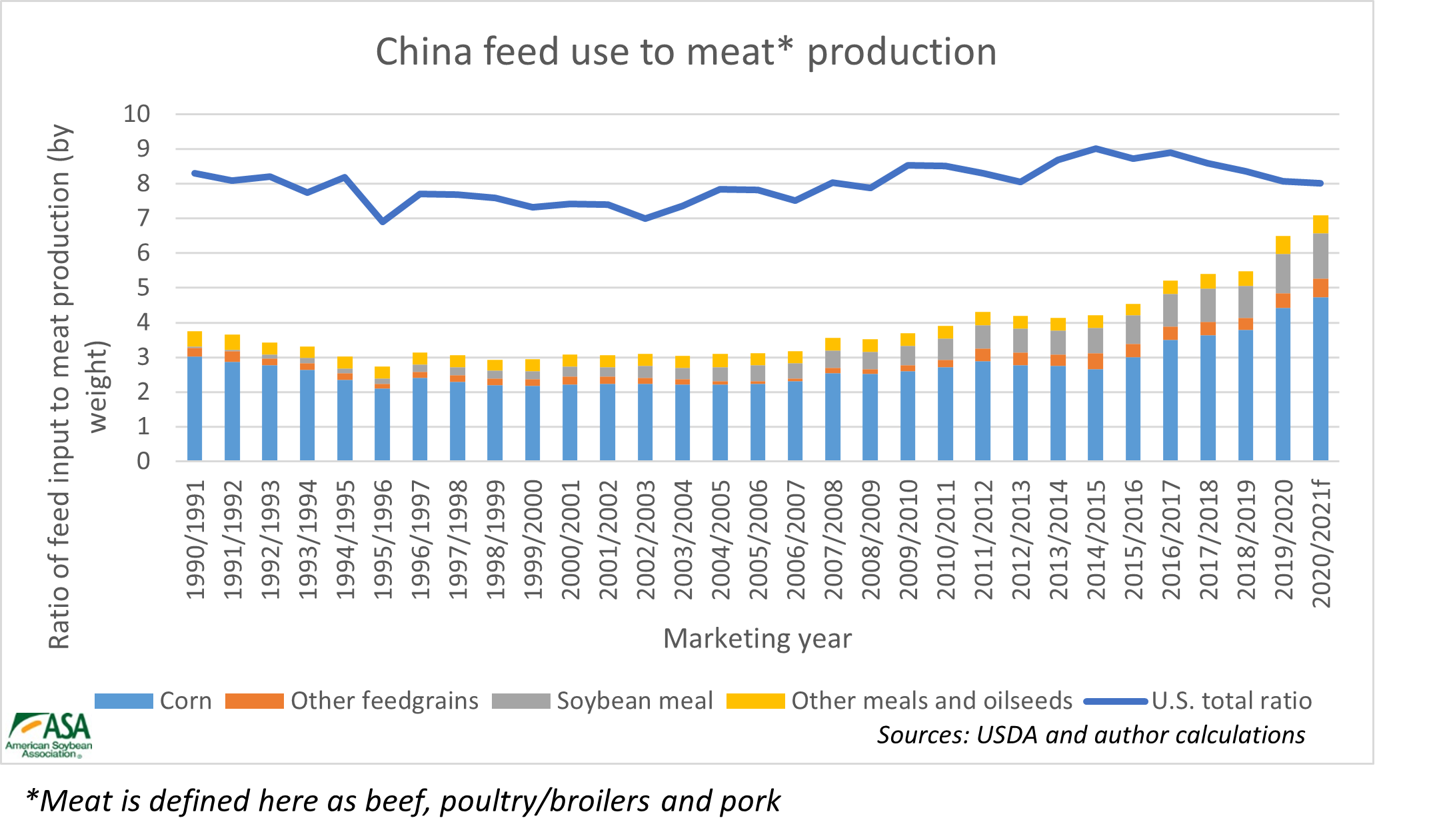 Given that China’s feed consumption relative to meat production is approaching U.S. levels, which are largely driven by commercial feeding operations, it appears that future soybean market growth through livestock feed rations in China will be limited. Likewise, it appears that growth in meat consumption in China will be much slower in the future. Figure 3 compares China’s per capita meat consumption to several developed nations. China and Japan consume about the same amount of meat on a per-person basis at about 25 pounds per year. These levels are below the 35 pounds per capita consumed in the European Union and well below the 55 pounds in the U.S. While China certainly could consume more meat per capita, it is already in the range of developed nations and the pace, after ASF recovery, will likely not continue on the path of the last 25 years. 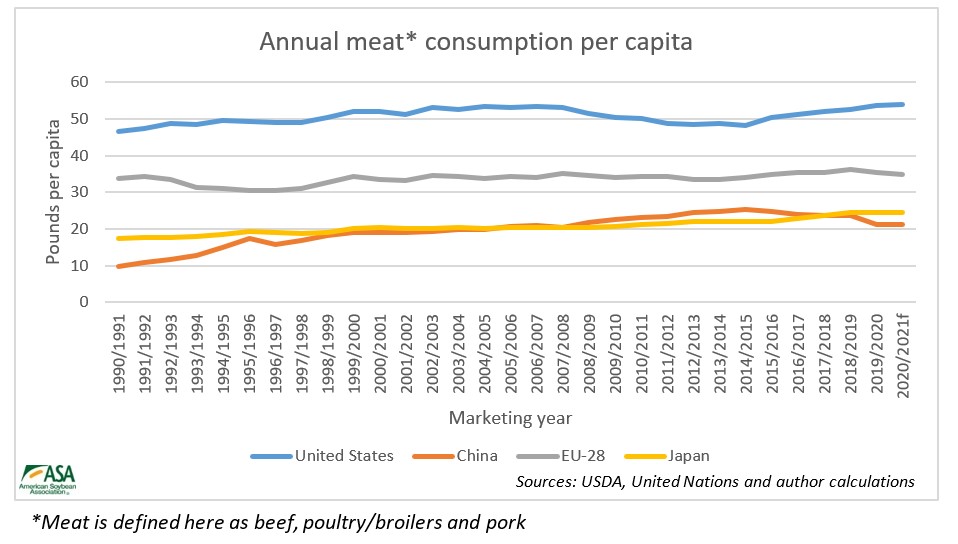 Furthermore, the population growth in China is slowing to the point of being almost non-existent (Figure 4). The projected growth rate for the 2020/2021 marketing year is about four tenths of a percent. The one-child policy was successful to the point that the United Nations projects that China’s population will start shrinking in 2032. As a result, it is unlikely that population growth will be a demand driver for China. 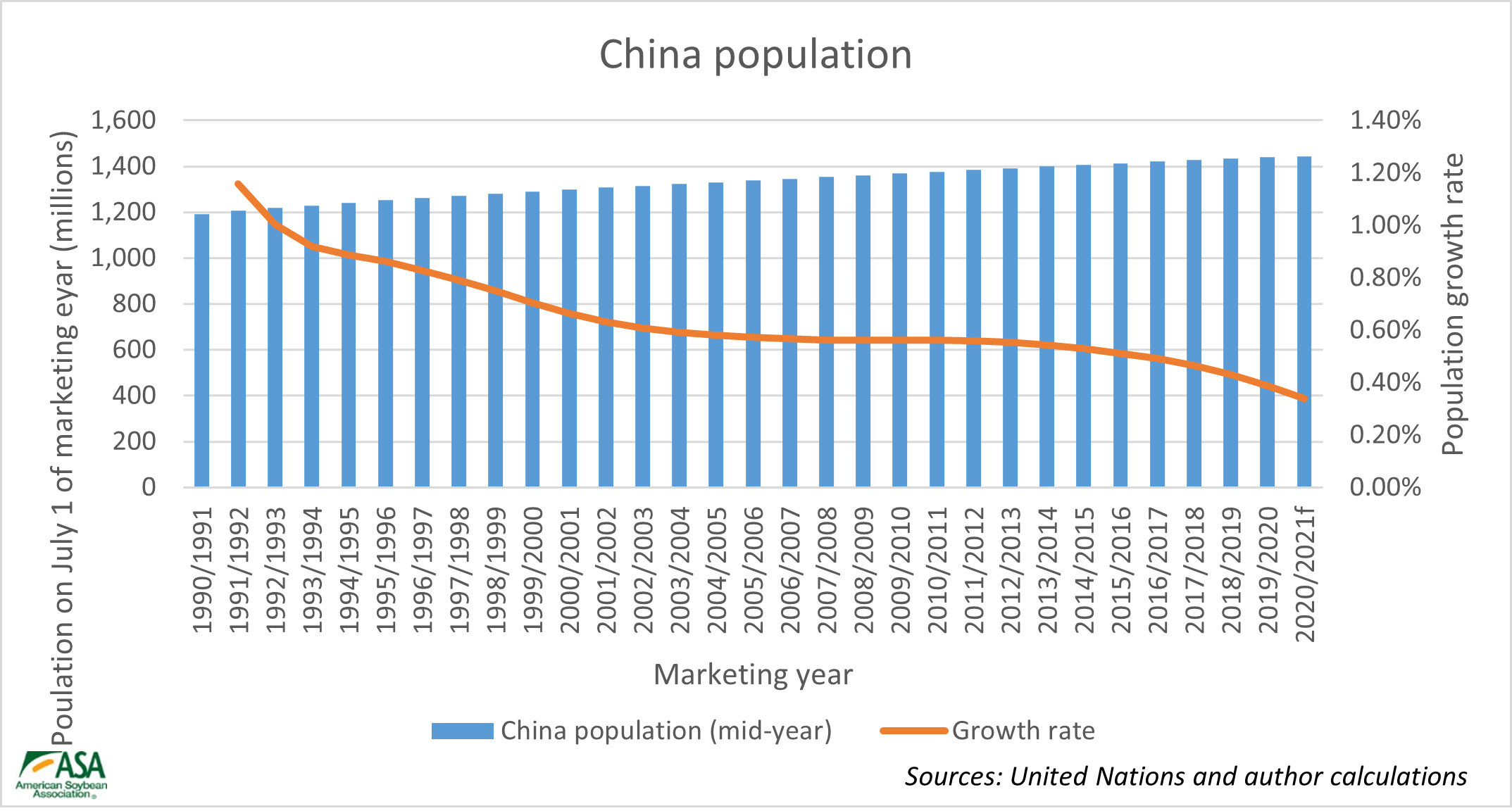 Thus far, we have only considered livestock and poultry demand for feed. In the United States, dairy accounts for about 9% of domestic soybean meal consumption. Although a comparable number for China is not known, its dairy herd is only about two thirds the size of the U.S. herd. This does present a potential opportunity for growth. The annual fluid milk consumption in China was 2.0 pounds per capita in 1991 and is projected to grow to 11.2 pounds in 2020. While this is a high rate of growth, the total lags Japan at 26.4 pounds and the U.S. and EU at about 140 pounds. Like livestock and poultry, dairy herds have been transitioning to commercial operations that produce higher quality milk with the commercial feed rations. China produces almost all of the milk it consumes domestically. Historically, dairy was not part of the Chinese diet. However, as incomes rise and health-based initiatives increase, dairy consumption is expected to continue to increase. 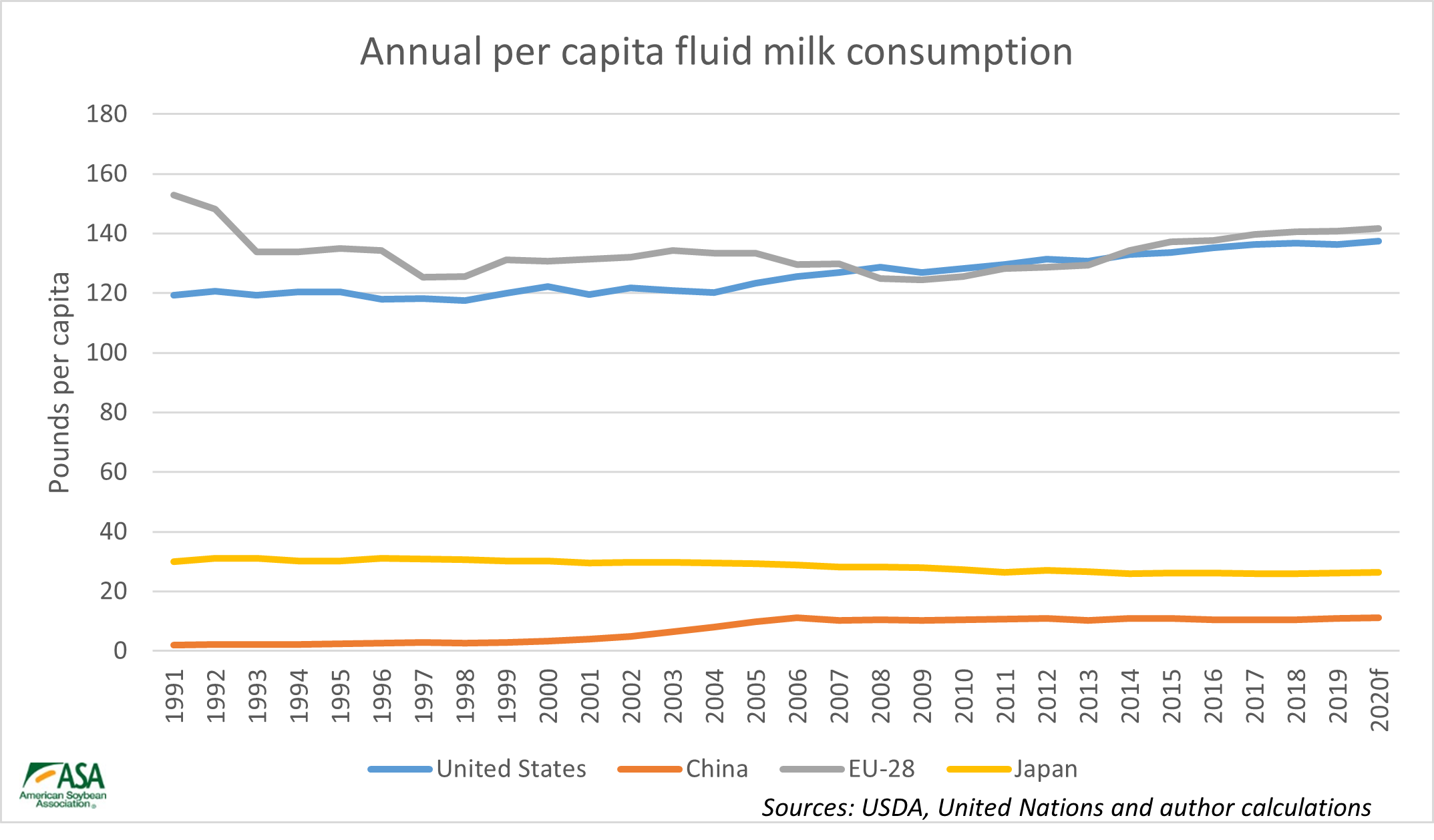 Rising incomes in China fueled the increase in meat consumption. This was joined with a simultaneous transition to commercial operations in the country that led to a massive increase in demand for feed. While China remains largely self-sufficient in corn, it quickly transitioned to importing soybeans. However, this growth is largely over: (1) China has largely transitioned to commercial animal operations, (2) per capita meat consumption is approaching developed-nation levels, and (3) population growth is slowing. Yet, dairy consumption in China is still increasing and has much potential. Although the growth in demand for dairy will likely be much less than for livestock, it would be on top of the levels that already occurred for livestock. As a result, China is expected to be a major importer of soybeans into the future, though growth will likely be at a slower pace.