Christmas for crop market analysts comes several times a year with presents delivered by USDA. As markets unwrapped their June 30th Acreage Report gift, they were met with a surprise. Found inside the packaging was a larger reduction in soybean acres than had been anticipated. The trade estimates averaged 90.4 million acres, whereas only 88.3 million soybean acres were in the report. The markets then responded with a surprise gift of their own, an over $1.50 drop in the soybean futures harvest price since the release of the report last week. Rain through critical growing regions and overall economic concerns have fueled the decline. This column looks to better understand USDA’s planting numbers.

The drop in soybean acres was the largest swing for a crop from the March Planting Intentions report (Figure 1). The intentions indicated that producers planned to plant a record 91.0 million acres of soybeans. It would have been the second time that the soybean crop was the largest by area. Ironically, the average trade estimate for soybean acres in the March Intentions report was 88.7 million acres, which is close the June number. 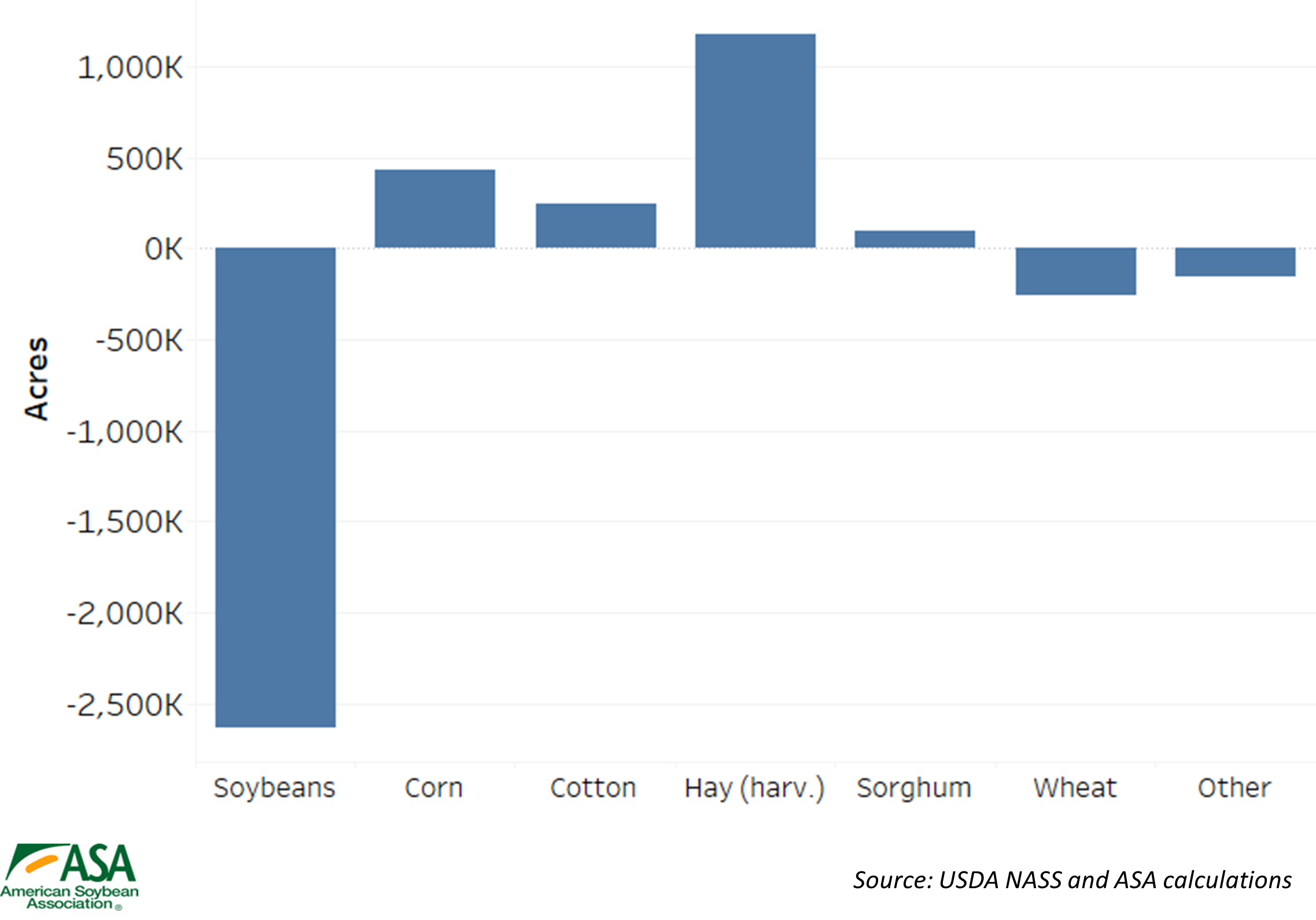 Corn area increased by about 400,000 acres from the intentions report to the June acreage report. The 89.9 million acres of corn was right on top of analyst expectations. The largest gain for a crop between intentions and June acreage was hay, which added about 1.2 million acres. This absorbed almost half of the lost soybean acres when looking at the effect on total acres. The “Other” category represents all other principal crops.

Figure 2 shows the actual plantings and prevented plantings for a subset of nine of the principal crops that are reported by FSA (see Footnote 1 for the list of crops). The prevented planted area is from FSA data, which includes farms enrolled in FSA programs. As a result, there are usually slightly fewer acres in that dataset, but NASS does not report prevented planted area, and FSA’s data should be relatively close. Given that total crop area in the U.S. is relatively fixed, the planted plus prevented planting numbers are stable through time. For example, the total has been between 257 million and 261 million since 2015. After high prevented plantings in 2019 and 2020 due to weather, 2021 nine-crop total planted area returned to normal levels. Farmers in March indicated they would increase the nine-crop total area by about 600,000 acres but ended up decreasing the area by about 1.6 million acres. While input costs have gone up substantially, crop prices were generally high enough for most crops to still encourage planting. FSA has not reported prevented planting numbers for 2022 at this point. 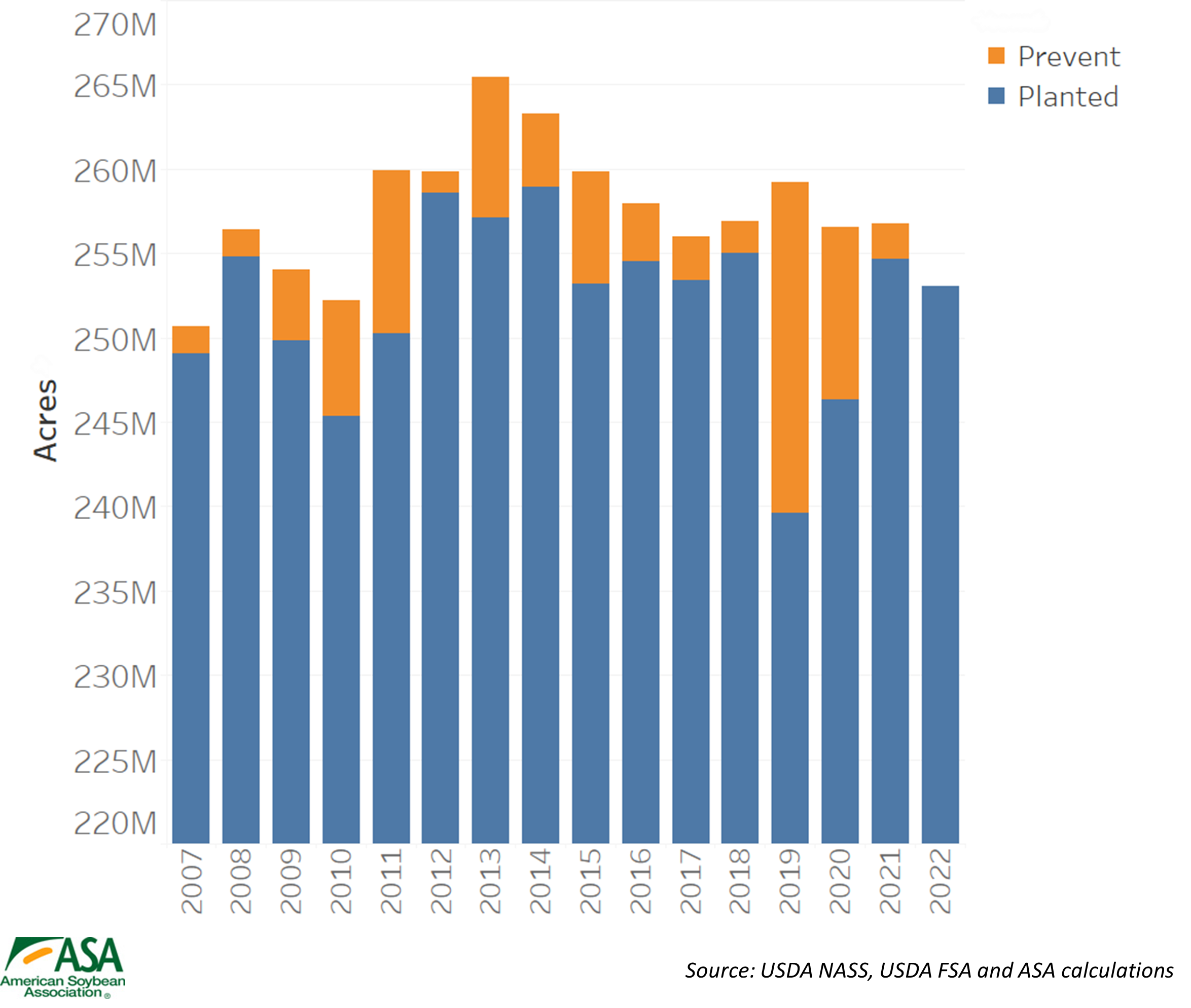 A look at how soybean area changed between March Intentions and the June Acreage reports helps demonstrate why total area has fallen despite economic incentives to plant. Wet conditions this spring in the Northern Plains have made it difficult to get a crop in the ground. Of the 2.6 million acre drop in soybean acreage between the reports, North Dakota, Minnesota and South Dakota alone account for 1.8 million of the decline. In fact, there were 15.8 million acres of soybeans left to be planted nationally when the survey was conducted between May 28 and June 16. While NASS has procedures to account for the unplanted acres, they are subject to estimation error. As a result, NASS plans to resample those three states in July to enhance its results.

The rest of the decreases were spread across the United States. Missouri also had a 200,000 acre drop, followed by Ohio at 150,000 acres. Only five states surpassed their planting intentions for soybeans. 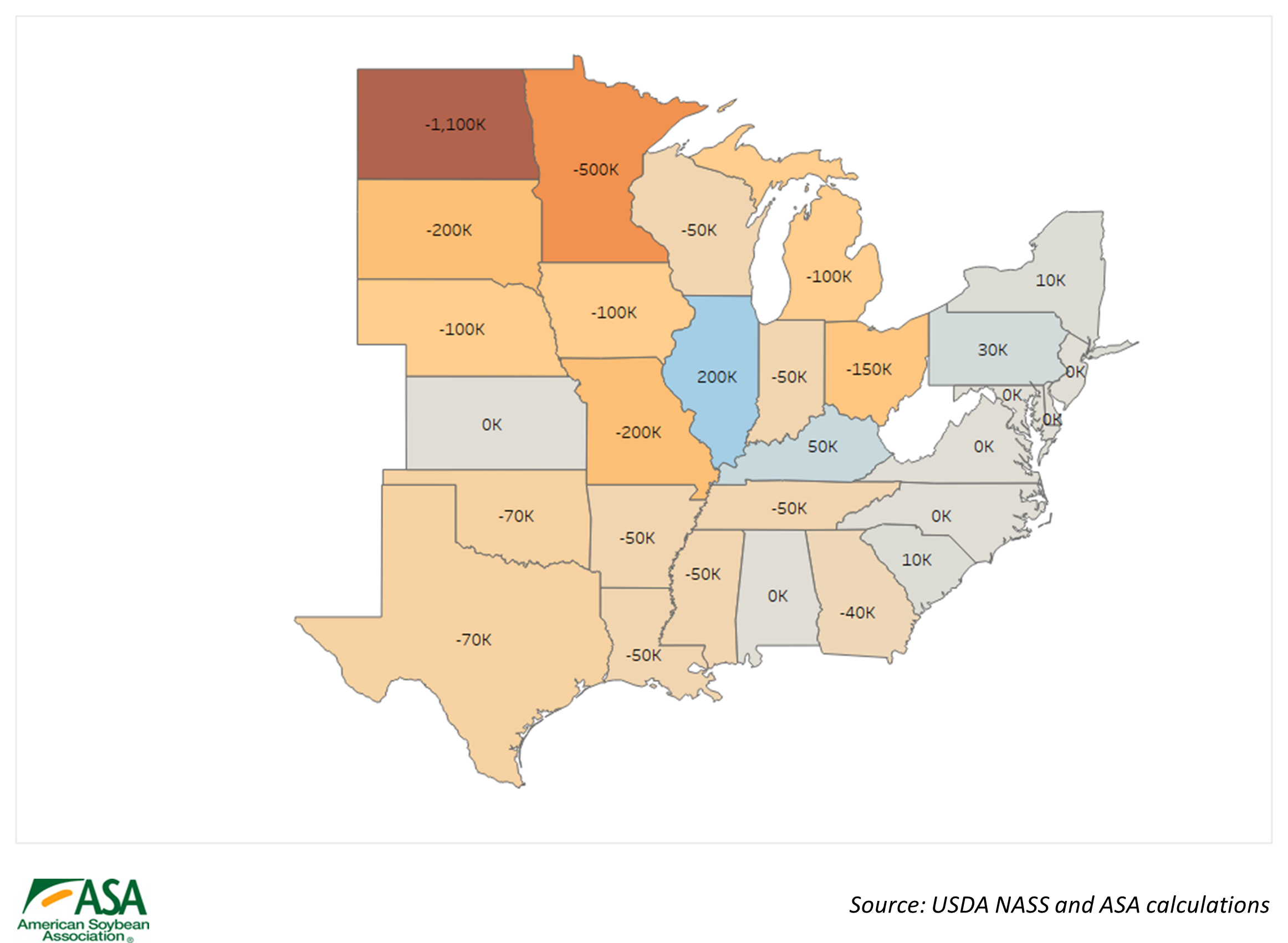 Figure 4 shows the total number of planted soybean acres in the June report. Illinois planted the most at 11.2 million acres, followed by Iowa at 10.3 million and Minnesota at 7.5 million. Despite the drop in North Dakota’s planted area, it still tied for the fourth most area with Missouri. 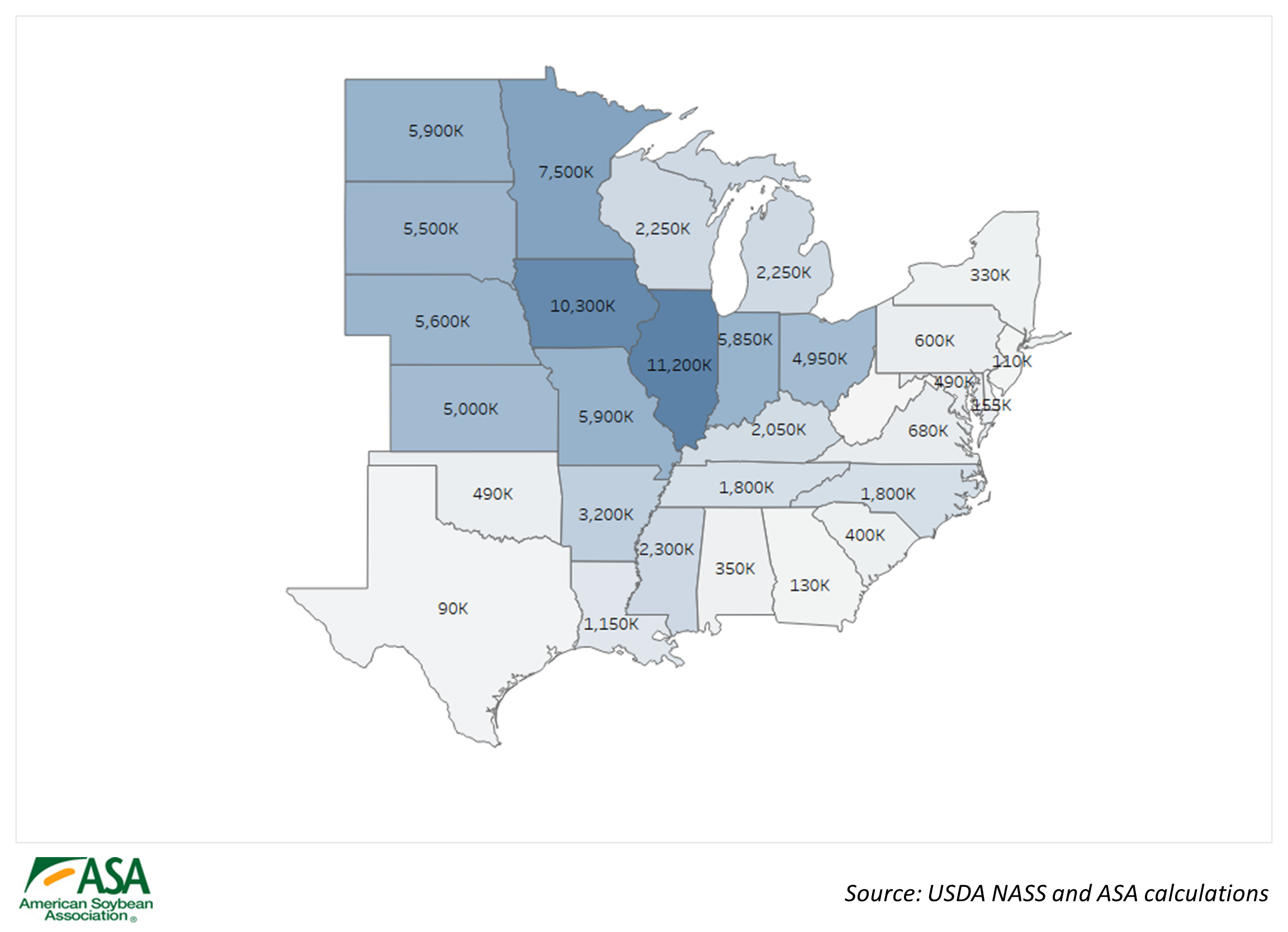 The 2.63 million acre drop in soybean area between intentions and planting would translate into a 135 million bushel reduction in U.S. supply if USDA’s trend yield of 51.5 is used. For comparison, USDA is also assuming ending stocks of 280 million bushels this marketing year for the United States. If realized, this would significantly tighten balance sheets. However, the soybean crop is progressing well with only 9% rated as very poor or poor and 63% good or excellent. This should help realize yields above trend. This along with potentially reduced demand from a weakening general economy has caused the markets to think that these factors have more than offset the loss of acres. USDA plans to release its resampled estimates for North Dakota, South Dakota and Minnesota in August, which will provide the next set of numbers for national acres. The market analysts and participants will be hanging their stockings.