Under the Renewable Fuel Standard, the Environmental Protection Agency must set annual biofuel blending levels for gasoline and diesel supplies. As part of that process, EPA releases a proposal and receives feedback from stakeholders. The past few years, EPA has acted slowly, setting blending levels after the relevant year had passed or retroactively changing the levels. This uncertainty made for operational difficulty within the industry. A consent decree—or settlement agreement approved by the court—with Growth Energy forced EPA to release the proposed 2023 blending obligations on Dec. 1, 2022.

EPA attempted to provide more certainty to the industry by setting the volumes for three years instead of the usual one. However, the agency failed to account for growth in the soybean industry when setting the levels, which significantly threatens the investment in the sector to lower carbon emissions from fuels. EPA justified this decision by utilizing a baseline that assumed no growth in the blending obligations to claim the industry could not meet increased obligations. While the soybean industry has been experiencing tremendous growth and it is expected to continue, the EPA announcement potentially grinds that growth to a halt.

The past couple of years have been awash in announcements to construct renewable diesel plants. This  biofuel is distinct from biodiesel and meets the same standards as diesel produced from petroleum. More about renewable diesel and the announcements can be found here. The soybean industry has been investing in crushing plants to meet the need for renewable diesel feedstocks, with well over 20 announcements for increased capacity over the next few years. State and federal policies encouraged transitions to low carbon fuels, and the soybean industry has been investing billions of dollars to help that transition. Biofuels provide an unpriced benefit to the public in that they help reduce carbon emissions. Given the higher cost of producing BBD than petroleum, the blending obligations help correct the classic market failure. However, EPA’s proposed rule allows almost no growth for biomass-based diesel (BBD) over the next few years (Figure 1). 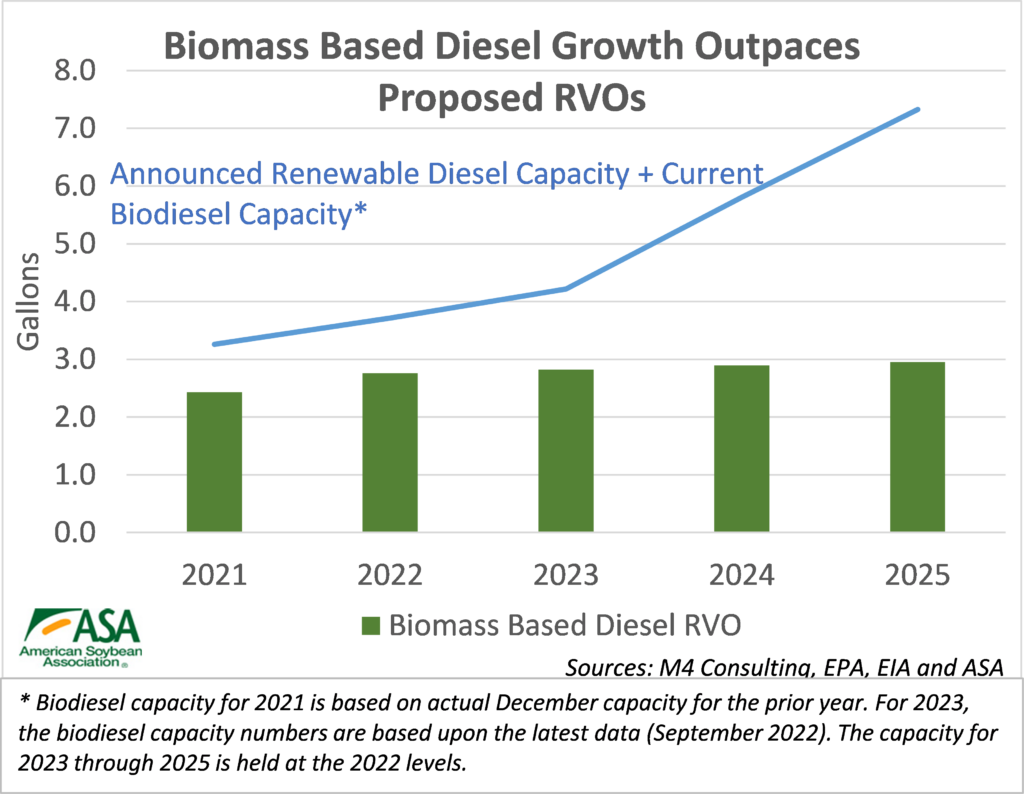 The EPA’s stated reason for allowing almost no growth in the biomass-based diesel blending obligations was limited growth in the production of feedstocks (such as soybeans), especially within the United States. It states, “For years after 2022, we anticipate that the growth in the production of feedstocks used to produce advanced biodiesel and renewable diesel (the two non-cellulosic advanced biofuels projected to be available in the greatest quantities through 2025) will be limited, particularly in the U.S.” [3]

EPA’s limited feedstock logic is based on a self-fulfilling assumption. The industry has had many announcements for new or expanding crush plants (Figure 2). The announcements between now and 2025 would about 460 million bushels of new domestic soybean crush. This is an increase of more than 20% in crush during this time, and more expansion has been announced in subsequent years.

How did EPA come to such a starkly different conclusion than what market participants are expecting? EPA states, “We also note that this increase (100 million RINs per year) is consistent with the projected increase in domestic soybean oil production through 2025 if the entire volume were used to produce biodiesel and/or renewable diesel.” [4] The volume increase referred to is from USDA’s 10-year baseline projections. However, USDA’s numbers are not a forecast [5]. USDA must hold policy constant in its baseline, according to Office of Management and Budget rules. As a result, the RVOs are assumed to remain flat in USDA’s baseline. To be clear, EPA is using an assumption of no growth in the RVOs to justify its decision to minimally increase the biomass-based diesel RVO. The baseline is not USDA’s best guess about what will happen. Instead, it must assume that there is no new RFS demand for the fuels. Under this condition, many of the crush plant announcements would be canceled, and other plants would likely go out of business, which explains why USDA’s crush numbers are so far below the announced crush expansion numbers. 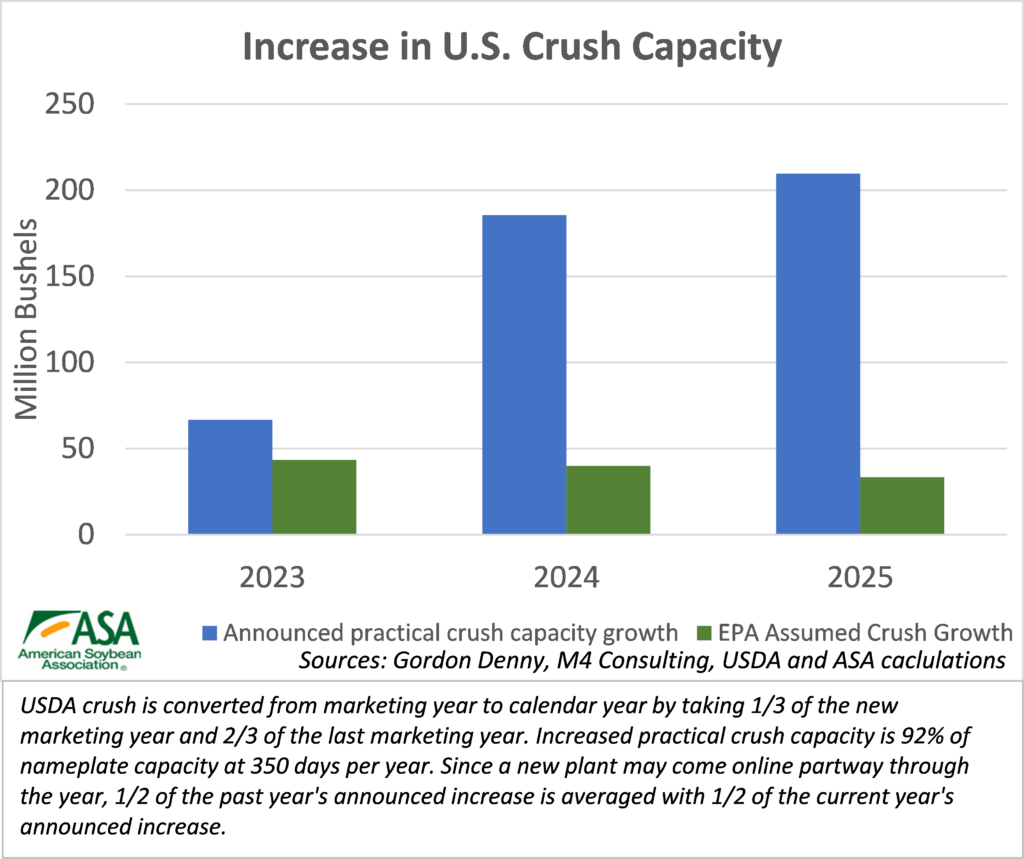 Setting the BBD RVO increase at the level of USDA’s soybean oil baseline growth is problematic—not only because of the assumptions USDA must use for its projections, but also because EPA ignores the growth in other feedstocks. EPA estimated the expected growth in BBD from these other feedstocks and projects 180 million gallons of growth between 2022 and 2025 in BBD produced from them. [6] This is almost the same level as the RVO increase for the category. EPA’s best estimate is that the increase in the BBD RVO could almost be met even without increasing soybean oil production.

Over the next three years, the expanded crush capacity announced by companies would increase soybean oil supplies by about 5.5 billion pounds. This translates into about 700 million gallons of renewable diesel, far above EPA’s three-year growth in the RVO of only about 200 million gallons. Adding growth from other feedstocks to the announced crush expansion creates a feedstock-abundant situation.

Billions of dollars are being invested in renewable diesel, soybean crushing plants and other infrastructure to be able to produce more BBD. The RVO proposal undercuts that investment. A low-carbon fuel for the heavy-duty transportation sector that is hard to electrify was set to help reduce life cycle emissions for transportation. Not only is that opportunity potentially lost, but the investments thus far could easily be lost, as the market may not absorb the increased production from the new infrastructure.

Soybean farmers who were set to receive a stronger basis for their soybeans because of the increase in local crushing may not have those opportunities anymore. Fortunately, EPA’s final rule will not be published until June 14, 2023. There is still time for the agency to correct the circular argument of “no growth occurring in the industry” to justify almost no growth in its proposed levels. Instead of policy stifling investment and opportunities, EPA would simply need to account for what is occurring.