The past few years have experienced a wild ride in the soybean markets with nearby futures price swinging between $7.80 and $16.77 per bushel since 2019. African Swine Fever (ASF) in China’s hog herd, a trade war and subsequent trade agreement and weather have all contributed to the price movements. As we start 2022, it’s a good time to look at the major factors driving soybean markets at this point.

No discussion of soybean markets can occur without considering China, as the country accounts for about 60% of the world’s imports of soybeans. As mentioned, China’s hog herd was devastated by ASF. The virus first appeared in the country in 2018. It is estimated it wiped out about half of China’s herd, which would be equivalent to 1 in 4 hogs globally. Fortunately, the hog herd in China has recovered, despite some regional ASF issues earlier this year. Figure 1 shows hog prices and margins in China. Hog prices jumped by about 100% during the epidemic while piglet prices rose more than sevenfold while producers tried to rebuild breeding herds. Margins for hog production followed a similar path to piglet prices with highs of almost 3,500 Yuan per head (about $500 at the time) compared to almost zero profits beforehand. However, hog prices and profits have fallen to pre-epidemic levels as the herd has recovered. In fact, margins have been in the negative range lately. Due to large losses, . While the recovery of the herd led to strong gains in exports for U.S. crops, a reduction could slow down or reverse some of that recovered market. 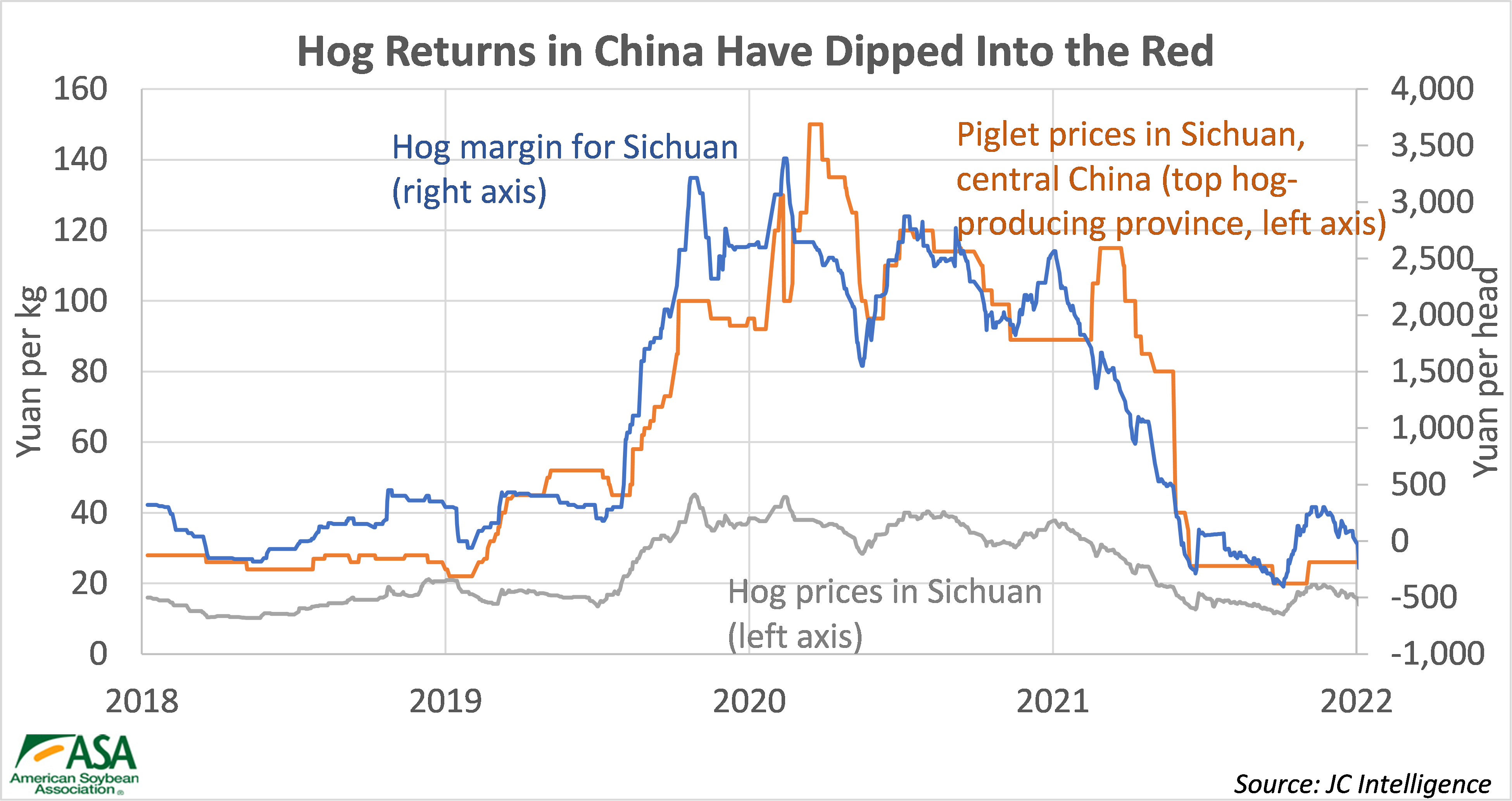 Another wild card with China is the status of the trade relationship. The U.S.–China trade war was halted with the signing of the Phase 1 agreement in early 2020. The pact suspended the enforcement of China’s 25% tariff on U.S. soybeans and established purchase targets of U.S. goods by China for 2020 and 2021. Part of the goods were agriculture-specific, including soybeans. The targets have now expired, but it is not clear at this point if or how this will affect trade. China has imported 76% of its two-year agriculture commitment with one more month of data left to compute the final number. The Phase 1 agreement states, “purchases will be made at market prices based on commercial considerations,” which allowed some flexibility toward meeting the targets. The agreement also projects that the countries will maintain the trade trajectories in 2022 through 2025. While none of this is alarming, it does increase uncertainty about what trade may look like in a post-target world.

Brazilian farmers have started harvesting their soybean crop with 0.2% of planted area harvested. Strong soybean returns with favorable planting conditions allowed Brazilian farmers to plant a record 40.4 million hectares (99.7 million acres) of soybeans according to Brazil’s agriculture department (Conab). The northern part of the country has received plenty of precipitation, but the southern has experienced drought. The expected record crop of 144.0 million metric tons (MMTs) has been shrinking. Conab has reduced its estimate to 140. 5 MMTs and USDA to 139.0. Even so, this would surpass the previous record set last year of 138.0 MMTs.

The large crop, coupled with an earlier harvest than last year, will likely allow Brazil to begin soybean exports at a faster pace than last year. Figure 2 shows how Brazil’s scheduled and actual soybean exports would set a January record if realized. Last year’s crop was delayed due to a wet planting season, but the shipments during a normal January are often much less. 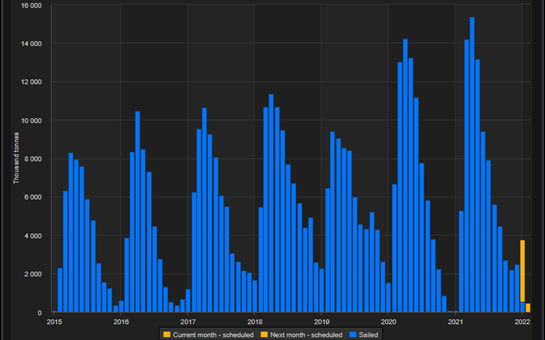 Like southern Brazil, Argentina has been facing dry conditions. The USDA just revised down its forecast for Argentina’s current crop from 49.5 to 46.5 MMTs. Additionally, the Parana river on which 80% of Argentina’s ag exports are carried is experiencing a record plunge due to the same hot, dry conditions. As a result, cargo loads are being cut by 30%.

Soybean markets are being driven by South American weather at this point. The final outcome from that will have a strong influence on prices as U.S. farmers head to the field this spring. The harvest 2022 soybean/corn futures price ratio currently sits at 2.35. This would normally favor corn plantings, but the high costs of fertilizer this year makes comparisons with previous years difficult. Soybeans need less fertilizer than corn and subsequently have a lower cost. That cost offsets much of the price difference, which has kept many of the 2022 acreage forecasts close to the 2021 plantings.

On the domestic demand side, more renewable diesel plants are expected to come online this year. This should help support soybean crush margins, which is spurring expansion in the crush industry of more than 13% the next few years. The renewable diesel expansion won’t be purely additive to soybean oil for biofuel use as biodiesel and renewable diesel producers compete for feedstocks.

While too many factors to mention here are affecting soybean markets, some of the principal ones are China’s feed needs, South American weather and U.S. fertilizer costs and renewable diesel/crush expansion. These factors have the potential to cause price swings in the coming year and deserve attention. Even so, there is always the possibility of a dark horse entering the stage and causing unforeseen disruptions.